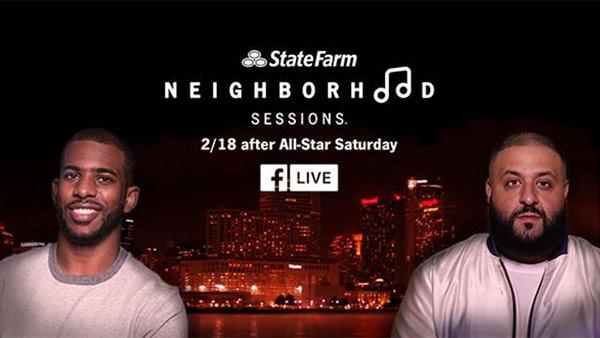 The event, which takes place at House of Blues on Feb. 18 in New Orleans, will be streamed live on the State Farm Facebook page. Musician Jon Batiste will also appear along with other special guests.

The concert, which State Farm is launching with NYC-based ad agency Translation, will celebrate community members who volunteered at State Farm-led community service projects in the area leading up to the event, earning exclusive access to the invite-only live concert.

This is the fifth State Farm Neighborhood Sessions, which began in June 2013 with Jennifer Lopez in the Bronx, New York. Other concerts have included Toby Keith on September 1, 2015 in Moore, Oklahoma; Dave Matthews Band on May 7, 2016 in their hometown of Charlottesville, Virginia and Usher on September 9, 2016 in Chattanooga, Tennessee.

The concerts were made into documentaries that aired on TNT. And, the Dave Matthews and Usher documentaries are also available online via the above links. This is the first time State Farm is using Facebook Live to stream one off the Neighborhood Sessions.

The community service projects hit home for Paul, who played for six seasons with the New Orleans Hornets before joining the Clippers, and Batiste and Khaled, who are both Louisiana natives.

“By hosting Neighborhood Sessions on Facebook Live, audiences around the world will see the work being done by State Farm, the Chris Paul Family Foundation and local community,” said Patty Morris, brand content director for State Farm, in a release. “The community programs in New Orleans leverage the power of basketball to inspire others to give back to their communities.”

As part of the State Farm NBA Cares Assist Tracker program, State Farm and the Chris Paul Family Foundation will unveil a new technology center/computer lab at the New Orleans Dryades YMCA on February 18. This follows a similar project unveiled in December at the Belle Chasse YMCA.

The NBA All-Star Game on February 19 marks the second season of the State Farm NBA Cares Assist Tracker. Throughout the season, State Farm and NBA Cares donate $5 for every assist made on the court. During the NBA All-Star Game, the partners will donate $1,800 per assist, representing the 18,000 State Farm agents that are in communities across the country. The Tracker will be visible on the video board throughout the evening, and fans can track the assists that will support the installation of educational technology throughout the country.

State Farm will continue to serve as the title partner of the State Farm All-Star Assist Center, a “social hub” located in Champions Square. Fans can submit All-Star related questions to @AllStarAssist on Twitter with the hashtag #StateFarm #HereToHelp and the staffers at the assist center will answer their questions. Separately, State Farm will position Assist Ambassadors around All-Star venues to assist fans and give away concession stand gift cards.

Throughout the weekend, State Farm will place lockers in high-traffic areas around New Orleans for fans to unlock and win prizes in The Right Combination Locker Hunt. Fans will find these locations with the help of brand ambassadors and will use RFID-enabled bracelets to try and unlock the Right Combination to win prizes.