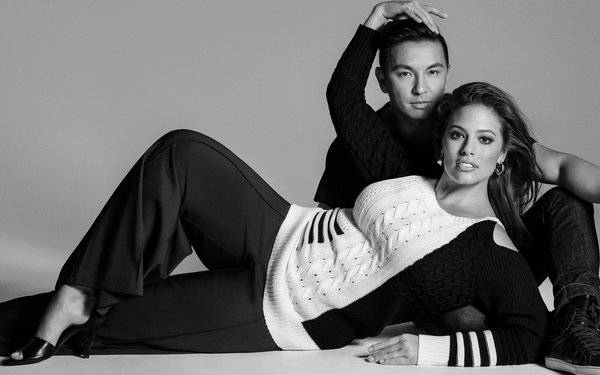 Lane Bryant is looking to solidify its position as the strong and sexy leader in plus-size marketing, with ads for its new Prabal Gurung collection, starring model Ashley Graham.

The line is rolling out in the midst of New York Fashion Week hoopla, just as Graham, an outspoken advocate for curvier women everywhere, is making a big splash. She’s appearing in both the Sports Illustrated Swimsuit Edition, and is on the cover of Vogue, the first time in its 125-year history it’s allowed a plus-size model to do so.

The ads, the latest in the black-and-white #ThisBody campaign Lane Bryant introduced last year, starts with Graham whispering “Dress me” to Gurung, then showcases the different pieces from the new collection.

“Prabal was remarkable in that he was, quite literally, inspired by the plus-size woman,” says Brian Beitler, Lane Bryant’s CMO. Often, he says designers simply try and adapt their ideas to larger sizes, but “he fully embraces what it means to design with this woman in mind, without compromising. And the fact that he had women walk his fashion show in these Lane Bryant designs speaks to the integrity of what he was trying to achieve.”

Beitler tells Marketing Daily that the impact of the #ThisBody campaign keeps building. “We have found the right way to share this message, and frame it in terms of women being comfortable in their own skin.”

Part of the retailer’s success has to do with striking the right note of body positivity, at a time when there’s still plenty of body-shaming out there, resonating with women of all sizes. Take stretch marks. “We posted a photo of model Denise Bidot from a swimsuit shoot on our social media channels back in December. We weren’t looking for any acclaim for not retouching it—we just thought it was a beautiful photo. It got so much attention for showing her stretch marks that we knew we had to use it in an ad, so that’s the ad we’re running in the Swimsuit Edition.”

The retailer has also been making a bigger push for its Livi activewear line, including videos about plus-size triathletes, yoga instructors and basketball players. “We’ve had as many as 1 million people tune in to watch our yoga classes,” he says. “It’s our goal to show that all kinds of bodies can be fit and strong.”

The ads supporting the Prabal Gurung collection, which bit stores later this month, are running digitally, supported by banners and print, including a two-page photo spread in Vogue. Laird + Partners is the agency.