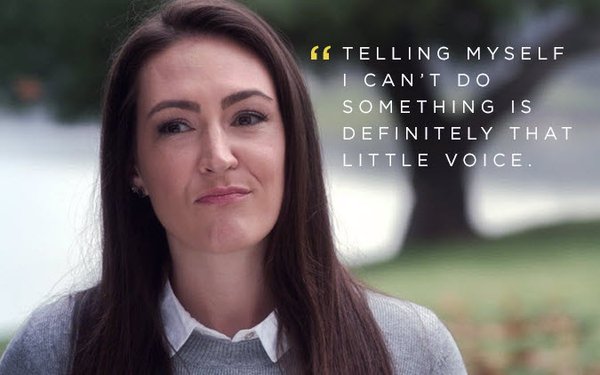 In the ad, Thomas stresses that she wants her own daughter to believe that she can do anything, and that self-confidence is the foundation for life success. (“If I don’t believe in myself, who will?”) The campaign also represents a return to promoting probiotics, the marketing differentiator that Activia pioneered. That message is driven home at the end of the TV ad.

Now, WPP’s Team Dannon is out with a one-minute-plus video that ties into the internal strength theme and ratchets up the emotional quotient. Labeled an “Activia Inner Voice Interview,” the video, “Don’t Tell Me I Can’t” (see below) came out of research indicating that 80% of women are “their own worst critics,” according to the brand.

The video documents the responses of women (most of whom look to be in their 30’s or early 40’s) to two questions: “What would you do when someone says you can’t do something?” and “Have you ever told yourself you can’t do something?” The emotion comes in the contrast between their determined, defiant response to the first question and their acknowledgments of self-doubt to the second.

Designed as a complement to the Thomas TV spot, the video is embedded in Activia’s Twitter page and its U.S. Web site, and will be promoted in paid social and paid online advertising starting in June, according to a brand rep.

The brand is also promoting that it is donating $250,000 to Girls Who Code, the U.S. nonprofit that aims to close the gender gap in technology.

Activia, which debuted in the U.S. in 2006 and had yogurt market share of nearly 9% as of 2010, had seen that share fall to 5.8% as of last year, per Euromonitor International.

After the brand’s U.S. growth stalled, the ubiquitous, probiotics/digestive benefits-focused campaign starring Jamie Lee Curtis, which ran for five years starting in 2008, was replaced by a couple of celebrity-driven campaigns — one starring Reba McIntire and then another starring health guru Travis Stork and Muhammad Ali’s daughter, Laila Ali.