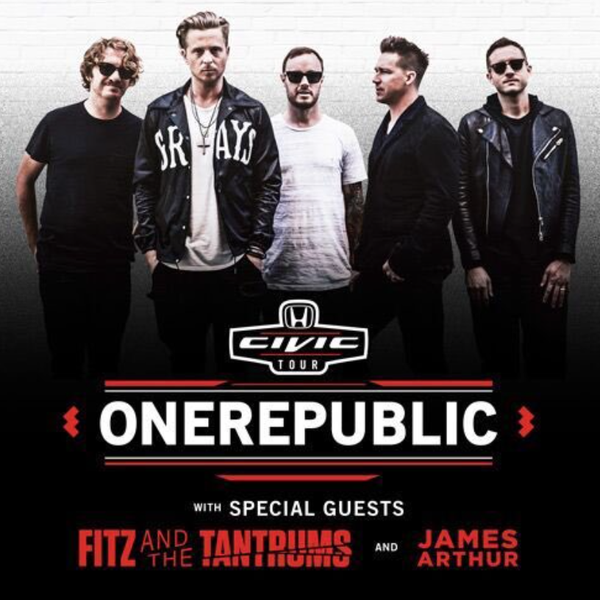 Honda has selected OneRepublic as the headliner for its 16th annual Honda Civic Tour.

Fitz and the Tantrums and James Arthur are the supporting acts for the 36-stop tour. The AT&T priority ticket pre-sale begins February 20 and Citi cardmembers can take advantage of a special pre-sale opportunity beginning February 22. Regular ticket sales start February 24.

The band released a video announcing their affiliation with Honda, saying they are “stoked” and calling the Honda Civic Tour the “benchmark of summer tours.”

The summer tour launches in Kansas City at the Sprint Center on July 7, and includes dates in Nashville, Detroit, Virginia Beach, Philadelphia, Hartford, Dallas, Los Angeles and, as the automaker puts it, “of course, in Anaheim at the Honda Center on Sept. 2.”

This year’s tour will offer the most engaging experiences and promotions for fans to-date, according to Honda. OneRepublic is releasing the official music video for current single “Let’s Hurt Tonight” today. Directed by David Frankel (The Devil Wears Prada, Collateral Beauty) the video was shot in New York City. Fans can watch the clip here and stream a new remix of the track exclusively at HondaCivicTour.com.

In collaboration with Honda, OneRepublic will design a special edition, one-of-a-kind Honda Civic Type R and will offer exclusive experiences to be announced April 5. Fans can also sign up on HondaCivicTour.com for exclusive OneRepublic content, promotions and ticketing.

In 2014, the automaker founded the Honda Stage music program, expanding its reach beyond live events to an online audience at www.HondaCivicTour.com