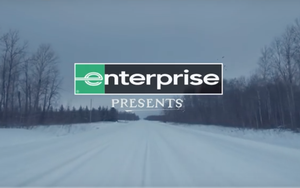 Enterprise is debuting a long-form documentary, which the company claims is a car rental industry first.

Called “The Road Through Warroad: Hockeytown USA,” the 30-minute documentary aired on NBC Sports at the close of “Hockey Day in America” on Feb. 19.

Enterprise has been an NHL sponsor for the past seven years. The documentary tells the story of Warroad, Minn., a small town of 1,781 people that has produced seven Olympic hockey players, five NHL players, and more than 80 Division I college players.

The company made a shift in brand positioning last year, focusing on highlighting its comprehensive transportation offerings beyond car rental. In conjunction with this shift, Enterprise also recently rolled out a new content strategy, aimed at creating and publishing emotionally rich content, including a digital magazine, Pursuits with Enterprise.

Enterprise created and produced the documentary (versus simply being a sponsor of it). The story originally started with a four-minute video that Enterprise created in April 2016. During the production of this piece, the brand, along with St. Louis-based Cannonball (its creative agency of record), found there was more to the story.

Creating and producing the documentary represents a major content milestone for the brand; it is the first long-form piece of content tied to its new content strategy, which is focused on storytelling that inspires, says Lee Broughton, VP of brand marketing for Enterprise North America.

“Our evolving content strategy is all about telling stories that are emotionally rich and moving,” Broughton tells Marketing Daily. “It’s part of our never-ending quest to be not just relevant, but deliver stories that pick people up emotionally and help place Enterprise top of mind and heart with consumers. Warroad is just that kind of story, and we jumped at the chance to bring it to life for a national audience.”

The documentary is scheduled to air three times nationally Feb. 19 - 28.

“Now, more than ever, we view ourselves as a content producer and storyteller versus a traditional advertiser,” Broughton says. “Producing the Warroad documentary enables us to take viewers on an epic hockey journey… a journey that we feel is most effectively brought to life over the course of a 30-minute film.”