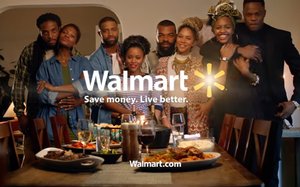 While many retailers had rough sledding in the fourth quarter, Wal-Mart just delivered a solid win in e-commerce: Sales jumped 29%, powered by its recent acquisition of Jet.com as well as online grocery purchases. “We're moving with speed to become more of a digital enterprise and better serve customers,” Doug McMillon, its president and CEO, said in announcing the results.

Total revenue for the Bentonville, Arkansas-based retailer rose 1% to $130.9 billion. (Excluding currency, its revenue gain is 3%.) In the U.S., same-store sales notched a 1.8% increase, with foot traffic improving 1.4%. And at stores in its Neighborhood Market format, which focus more on fresh foods and groceries than other Walmart stores, comparable-store sales rose 5.3%.

For Walmart’s U.S. division, sales increased 2.8% to $83.7 billion. Company executives say food sales remain healthy in the U.S., and that apparel sales also gained, while results in entertainment, electronics and gaming were weaker in the holiday quarter.

Last week, the company announced the $51 million acquisition of Moosejaw, an outdoor retailer, as it continues to expand its e-commerce offerings. And last month, it acquired ShoeBuy, and announced a free two-day shipping program on some 2 million items. With no membership fee, it is another attempt to win business from Amazon Prime. “We are moving at the speed of a start-up,” said Marc Lore, founder of Jet and president/CEO of Walmart’s e-commerce division, in making that announcement. The e-commerce division also underwent a shake-up and restructuring last month.

“There is a very clear and concerted effort by the business to transform its fortunes in online and to do this by acquiring capacity, talent and capability,” writes Neil Saunders, managing director of GlobalData Retail, in his commentary on the Wal-Mart results. “We see these deals as a shortcut to growth … in a way that would be difficult to achieve if everything was to be done organically. There is no denying that Walmart did not flex its e-commerce muscles soon enough, but it is now working out at a rapid pace. The next step must be to focus on improving the website, mobile and app experience.”