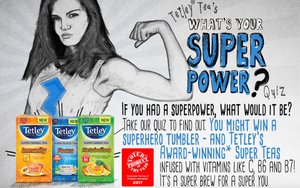 Tetley is looking to capitalize on the popularity of its new vitamin-infused Super Teas line with a social media engagement and ad campaign driven by a “What’s Your Super Power Quiz.”

The Super Teas, launched in the U.S. last September, recently won in the beverages category in Kantar TNS’s annual “Product of the Year” product innovation awards, which are based on a nationally representative survey of 40,000 consumers.

The humorous quiz/sweepstakes, which is hosted on Facebook, asks participants questions premised on what kind of powers they would have if they were a super hero.

Those who take the quiz, “like” the brand on Facebook and provide their emails are entered for chances to win a "super hero tumbler” and boxes of the Super Teas, and are driven to the brand’s Web site for a $1 coupon usable in-store or online.

Along the way, they learn about the various vitamins and health claims (such as boosting immunity, metabolism and focus) of the teas’ six varieties, and the products’ availability at local grocery retailers.

The brand has found Facebook to be a successful platform both in awareness and sales conversion terms, Marc Birnbaum, marketing executive at Tetley Tea, tells Marketing Daily.

For this social campaign, created and implemented by The S3 Agency (Boonton, New Jersey), Tetley will also run a “highly targeted” Facebook ad campaign to reach consumers beyond the brand’s core black tea-drinking base and get them to take the quiz; promote social sharing opportunities; and employ PR to targeted influencers and media.

Like other social campaigns, this one also gives the sales team an added reason for retailers to make larger buys and provide the teas with better on-shelf positioning.

The synergistic outreach to consumers, retailers and media reflects Tetley’s confidence in the new line. “These products are really differentiated,” says Birnbaum.