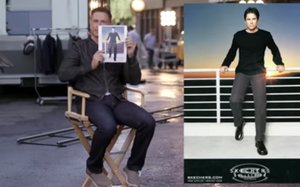 To launch its latest comfy collection for men, Skechers is bringing actor Rob Lowe back for a TV campaign. The actor last appeared in print ads for the sneaker company back in 2001, in a series that included other Brat Packers like Robert Downey Jr. and Mat Dillon.

The Manhattan Beach, Calif.-based company, which posted a behind-the-scenes video, says the global campaign focuses on how both comfort and style fits into Lowe’s life. Lowe, an avid surfer and fisherman, has had the sturdiest career of the 1980s-era Brat Pack, including such TV roles as Sam Seaborn on The West Wing, as well as roles in Behind the Candelabra and The Grinder. Last year, he joined CBS’ Code Black.

And Skechers is known for having all kinds of fun with its spokesmen, from current front men Joe Montana, Howie Long and Sugar Ray Leonard, to past efforts with Ringo Starr, Joe Namath and Wayne Gretzky.

The Lowe campaign comes at a pivotal time for the company, as it intensifies its efforts to appeal to a customer base that is both younger and more international. Despite posting record sales for the fourth quarter last week, a 5.8% increase to $764.3 million, earnings fell sharply, down 77.4% to $6.7 million, and it says it expects flat to slightly positive sales in its domestic wholesale business next quarter.

Sales gains including heady growth internationally, gaining 17.1% overall and 48.5% in China. International sales now account for 46% of revenues, and the company hopes to increase that to 50%.

“We believe we are continuing to increase market share around the globe as we experience the strongest growth coming from our international businesses,” says CEO Robert Greenberg in its earnings announcement. “Our continued growth and strong market position is due to aggressively revamping our product lines to include more youthful, relevant and innovative styles, while still creating comfort footwear that our broad consumer base finds appealing.”

He says plans include new collections across all divisions, as well as lighted footwear, a new performance line, and a collection “perfect for the Millennials and post-Millennials.”