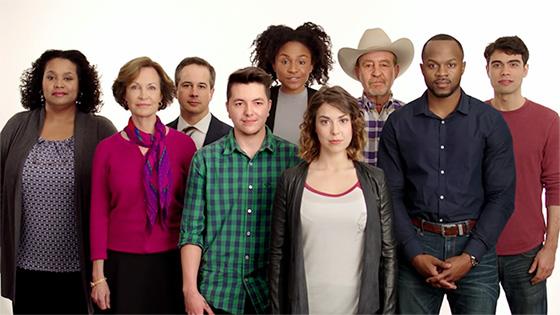 While the Trump Administration is busy curbing LGBT bathroom rights on the national level — evidenced by its action on Wednesday-- states also have the power to curb or codify such rights. North Carolina has had a law in place since last March that restricts public bathroom usage by biological gender as stated on birth certificates.

Texas is in the process of enacting similar legislation. But Austin-based ad agency GSD&M (part of Omnicom) in collaboration with ACLU of Texas and Legacy Community Health is out with a new campaign this week that is trying to persuade the state’s citizens that the bill, known as SB6, is discriminatory.

The agency has created an ad directed by Hollywood filmmaker Richard Linklater (“Boyhood,” “Everybody Wants Some!”) with the tagline “I Pee With LGBT.”

The spot features a variety of men and women designed to represent a cross-section of Texas society (which, except maybe for the guy in the cowboy hat, is pretty much like the rest of U.S. society) that share in telling what the bill is about and why it is wrong.

“You’ve got to take a seat to make a stand,” says a middle-aged woman midway through the ad, shown sitting in a bathroom stall and passing a roll of toilet paper to the occupant in the adjoining stall.

“This isn’t a privacy issue,” the woman adds during the hand-off, as the recipient then intones “because we can take care of ourselves.”

The scene cuts to a teacher who proclaims the bill is wrong-headed because “money should be spent to keep kids in schools, not out of bathrooms.”

The scene then cuts to a men’s room where a man in a ten-gallon hat who appears to be in mid-pee turns to the camera and states, “passing that bill discriminates against family and friends,” as a transgender man walks in and adds, “and me.” “And that guy,” the cowboy agrees.

A man in a business suit makes a point about how such a bill would hurt Texas businesses, a not-so-veiled reference to the widely reported losses suffered by North Carolina since its bill was enacted.

Back to the cowboy who insists: “We damn sure aren’t going to end up like North Carolina.”

The campaign (done pro bono by GSD&M) also includes a Web site where people can go to get more information on the issue and how they can help get the bill quashed.