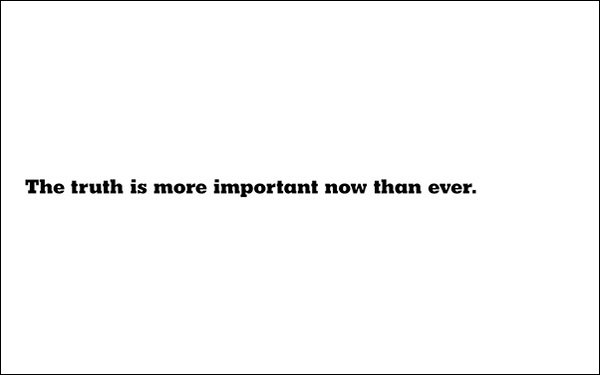 is launching its first major brand campaign in decades, according to an e-mail from publisher Arthur O. Sulzberger Jr. sent to subscribers Thursday afternoon.

“There has never been a more important time to share our story and what we stand for as an organization…. This is the right moment to assert the value of quality journalism,” Sulzberger wrote in the e-mail.

The e-mail included a link to a hub, dedicated to touting the quality of the the Times’ journalism and the perks of getting a subscription, including a video of the company’s 30-second ad commercial.

The ad repeats the words “The Truth Is…” on screen, with different endings including “our nation is more divided than ever" and “alternative facts are lies.” Voices in the background get increasingly louder until the ad ends with, “The Truth is more important now than ever.”

In his e-mail to subscribers, Sulzberger said the campaign “is based on a fact — that the truth matters, now more than ever. The truth, as our journalists can attest, is also incredibly hard to get to. We remain undeterred in our efforts to reveal and report the facts with integrity and courage.”

The New York Times will air the ad on TV during Sunday’s broadcast of the Academy Awards on ABC, the Times’ first television ad in years.

Ads during the Oscars don’t come cheap: 30-second commercials go for between $1.9 and $2 million, according to a Reuters report.

The Oscars is typically the most-watched event broadcast in the U.S., aside from the Super Bowl and other sports events. Last year’s Oscars broadcast brought in 34.4 million viewers.

The last TV ad from the Times was a direct response television ad promoting subscriptions, which launched in 2010 and ran for about four years. The last brand campaign TV ad from the company was in 2006, called "These Times Demand The Times.”

The New York Times’ newest campaign is a response to President Donald Trump’s attacks on the newspaper, one of the many news outlets he claims spreads “fake news.”

In a tweet last week, Trump cited The New York Times, NBC, ABC, CBS and CNN, calling the media "the enemy of the American People!"

The Times added 276,000 digital-only subscriptions in the last three months of 2016, following the election of Trump. The publisher now has a total digital and print circulation of over 3 million.