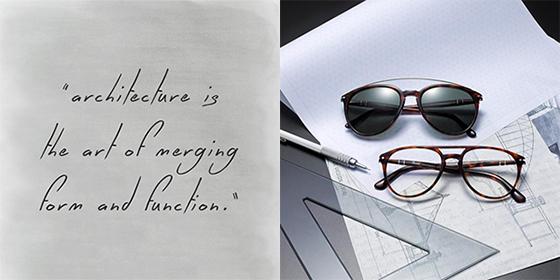 Persol Eyewear and its digital agency Kettle are introducing a multi-channel global campaign that uses the aesthetic of modern architecture to draw attention to the contemporary design of Persol's latest sunglasses and other optical products.

While Persol has previously focused on craft in its creative, from calligraphy and writing to acting, the nod to modern architecture is a first for the brand. It’s also the first time Persol has worked with acclaimed photographer Christopher Griffith who specializes in architecture.

The full campaign culminates in a unified mosaic on Persol's social feeds. The individual posts alternate between three different types of content. The first shows architectural exteriors, which root users in the world of the campaign. The second introduces still images of the brand’s latest products that also capture architectural tools and abstract lines and curves of modern edifices. And the third content type uses “inspirational” copy to speak to the principles of craft that shape both contemporary architecture and the new Persol collection.

This strategy is designed to age down the brand. Persol’s typical target focuses on an affluent man typically 25-40 years old, whereas the new campaign seeks to engage a slightly younger, more modern audience.

Kettle has worked with Persol since 2015 and with parent company Luxottica since 2013.