Trump Threatens To 'Do Something' About The Media, Bars Major Outlets From Press Briefing 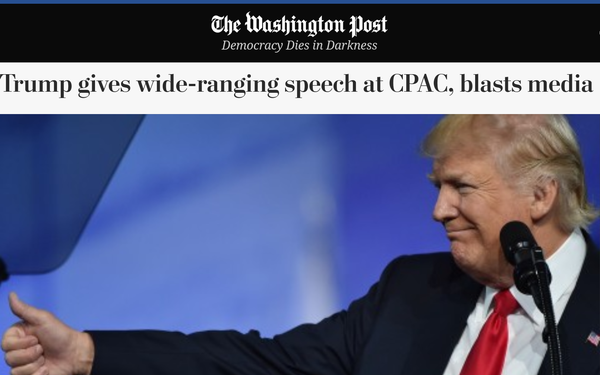 The White House barred some of the nation’s top news organizations from today’s press briefing, not long after President Trump threatened to “do something about” the press during a speech at a convention of political conservatives.

Editor-in-Chief Lydia Polgreen said The Huffington Post was also banned from the briefing, stating: "We are deeply disturbed by this decision and are heartened that other members of the White House Correspondents Association decided to protest the gaggle in solidarity.

"We hope that the White House will recognize the vital importance of including all credentialed media outlets when briefing reporters on matters of undeniable public interest."

The briefing took place hours after President Trump spoke at the Conservative Political Action Conference in Washington, D.C., this morning. Much of his speech was devoted to media’s role as the “opposition party,” especially in reporting on “leaks” within the White House.

He continued to label the nation’s top news organizations as “fake news” and singled out CNN, NBC, ABC and CBS.

Some news media are fighting back via their own branding initiatives.

The Washington Post this week introduced a new slogan on its masthead -- “Democracy Dies In The Darkness” -- and The New York Times unveiled a new truth-oriented branding TV campaign that will break in ABC’s telecast of the Oscars Sunday night (see related story).