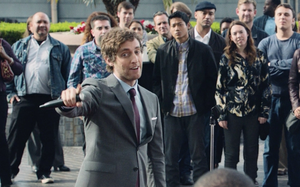 Winning an award for the superiority of one’s wireless network is tough. Consumers don’t really know (or care) what the ratings are, making it hard to differentiate one measurement against another. So Verizon is taking to a big stage to show off what it means to be at the top of Root Metrics’ evaluations.

“RootMetrics is like the Oscars of telecom -- it’s the nation’s most rigorous, independent study, so when they declare Verizon as the undisputed leader for network and coverage reliability, it speak volumes,” Nitti tells Marketing Daily. “But a consumer may not know what RootMetrics is. To develop creative that makes this huge industry honor relevant to a consumer, we made it simple and humorous which in turn makes it more relatable.”

The spot features actor Thomas Middleditch (who has appeared in other Verizon spots touting its unlimited data plans) taking his place in front of a crowd to talk about sweeping all of Root Metrics’ six performance categories. As he tries to drop the microphone on Verizon’s performance, crowd members interrupt him to ask what Root Metrics is, whether people dress for those awards and why it’s a big deal.

“Because we would be premiering the spot at the Oscars, we wanted to feature talent that was recognizable and part of the entertainment world,” Nitti says. “The goal for us was to have the viewing audience walk away with a clear understanding of why this was an important win for Verizon and how it reinforces our number one position in the industry when it comes to network and coverage reliability.”

Although the spot is clearly geared toward airing during an awards show, the company has created a second commercial to air through the remainder of the week that focuses more on the power of the network, Nitti says.