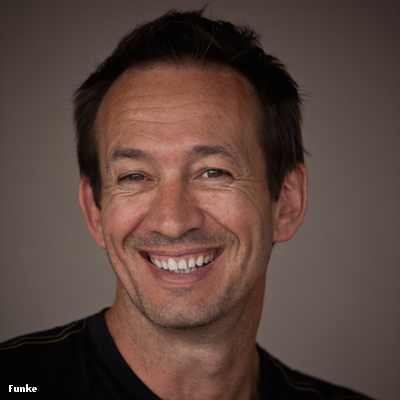 The agency is a WPP company founded on a partnership with Mazda and oversees the advertising and marketing for Mazda North American Operations. Funke’s first day with GTM in Costa Mesa, California will be March 6.

Harvey Marco, The Garage Team Mazda’s last CCO, reportedly left the agency in late September. He still lists that position as his most recent position on LinkedIn, ending in 2016. Marco has been leading creative at Garage Team since its inception in 2010. Garage Team Mazda’s most visible recent work has been the “Driver’s Life” campaign and “The Driver in All of Us,” a three-minute film profiling both amateur and professional drivers.

It could not be determined at press time whether the change had been made at the request of the client or else what motivated it. Mazda could not be reached for comment.

He most recently served as vice president, creative director at Saatchi & Saatchi Los Angeles for 11 years. As an experienced veteran of automotive advertising, Funke’s brand-building work has appeared in case studies across the world and has won more than 80 local and international awards.

Funke has worked on campaigns across a variety of accounts including Apple, BMW, Ford, Infiniti, Land Rover, Mercedes-Benz and Toyota. Funke was born in South Africa and started his career at Grey, JWT and TBWA Hunt Lascaris in South Africa where Mazda was one of the first major brands he worked on.

“We are delighted to have Erich’s creative leadership at GTM,” said Michael Buttlar, WPP Mazda global client leader and CEO of GTM, in a statement. “As an integrated-team agency, we are equally excited about Eric’s reputation as an enthusiastic collaborator and skilled team-builder, both with his clients and within his own agency.”

“I find Mazda to be an exciting brand with a really authentic and compelling story to tell,” says Funke in a statement. “I look forward to working with GTM to continue to develop brave ideas for Mazda, big or small, with smart, strategic solutions.”

His most recent initiatives at Saatchi include leading the Toyota Camry creative launch. He also helped orchestrate the creative in 2012 in which a Toyota Tundra towed the retired Space Shuttle Endeavour to its ultimate resting place, which won awards worldwide including four Cannes Golds, two Golds at The One Show, and five Golds and a Platinum effectiveness award at the AMEs.

“Throughout my career, I have believed in effective solutions and to this end, have skillfully adapted to the clients’ individual needs,” Funke writes in his online bio. “I'm a strong believer in developing 360-degree communications built on ideas rather than just executions and have created advertising across all media from publishing books, to staging events, to creating digital platforms, content, as well as TV, poster, print, radio and sponsorship. And although I will admit I'm probably the worst Facebook friend ever, because I flit in, and flit out, I navigate brands through the digital space using social media with great success.”