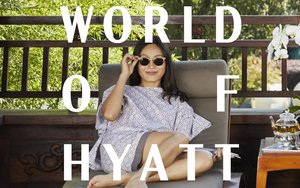 Hyatt Hotels is launching a campaign that includes the first TV spot on behalf of the company’s full portfolio of brands in nearly a decade.

Themed “For a World of Understanding,” the spot features the timeless (and perhaps, very timely) song “What the World Needs Now Is Love,” performed by Grammy nominated artist and songwriter Andra Day. The song was written and composed by the iconic team of Hal David and Burt Bacharach and first released in 1965.

Created by MullenLowe, the 60-second spot was filmed earlier this year in Thailand, Morocco and Spain, and explores how people from different cultures and countries unite through simple human connections. A 30-second version debuted Sunday night during the politically charged Academy Awards. It features a series of personal vignettes that speak to the power of understanding.

On March 1, Hyatt Hotels will officially launch World of Hyatt, the company’s new global platform to build and engage a community of travelers around the idea of understanding. It reflects Hyatt’s purpose and reaffirms its commitment to building genuine and trusted experiences and engaging its community of loyalists in a way that is meaningful to them, according to the company.

“The work on World of Hyatt was driven by a simple insight about the human heart -- that the greatest longing is to know and be known, to understand and be understood,” said Maryam Banikarim, global chief marketing officer, Hyatt, in a release. “This platform is about the power of a little understanding. Listening, noticing each other, extending a thoughtful gesture -- can make all the difference. This is how we connect on a deeper level – to inspire irrational loyalty.”

The global campaign will extend across TV, digital, social, out-of-home, in-hotel, print, and events throughout 2017 with an emphasis on the United States, China and India. Hyatt also turned to the Hyatt family to bring its story to life. Hyatt colleagues around the world wore Spectacles by Snap Inc. to offer a perspective of the world through their eyes. Their stories have been woven together and will be shared internally and externally through social media and other channels.

“We knew there was a great opportunity to not only craft something very honest, authentic and true to the Hyatt brand but also create something resonant at a time when the world really needs it,” said Tim Vaccarino, executive creative director, MullenLowe, in a release. “It’s the small things that can have an amazing impact, things everyone is capable of; a knowing glance, a smile, an outstretched hand. These things transcend race, language and culture.”

A new loyalty program also will go live on March 1. There are more tiers and more ways to earn status. The tier names -- Discoverist, Explorist, Globalist -- reflect the aspirations of members as they travel and expand their world.

Also as part of the campaign, Hyatt is collaborating with AFAR, a company that was founded on the notion that travel brings about understanding, which will allow World of Hyatt a way to engage guests beyond traditional hotel stays. The two are preparing an immersive once in a lifetime excursion to Tokyo.

The hotel company also is supporting non-profits Learning AFAR and No Barriers USA, which conduct a program designed to inspire transformational learning. Hyatt also is supporting Chicago Public School students to participate in an immersive 4-6 month curriculum that teaches students how to overcome obstacles, live a life of purpose and give back to the world, culminating in a 10-day excursion to Costa Rica.