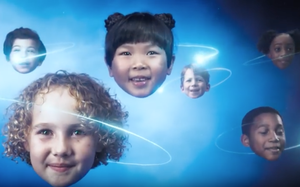 The Oscars are right up there with the Super Bowl as a popular place to showcase new ad campaigns.

Even though sales of green cars have cooled, Honda's decision to advertise the Clarity still caught the attention of car shoppers: the Clarity saw the biggest gain of any specific vehicle advertised, up 50%, according to Edmunds.

The spot, from RPA, shows disembodied children’s head singing a rendition of “Don’t Stop Thinking About Tomorrow,” originally recorded by Fleetwood Mac in 1977. It broke earlier in February as part of Honda’s multi-channel campaign about fuel cell technology.

PES, the Academy Award nominated stop-motion artist helped create the spot. The children who make up a choir of singing hydrogen molecules were filmed individually with intricately choreographed motion-control cameras and orbiting spotlights. These scenes were then digitally composited with special effects to create a musical atomic galaxy.

"Even though sales of green cars have struggled recently, the fact that the Honda Clarity saw the biggest traffic lift for a single vehicle shows that the Oscars are still a smart place to talk about sustainability,” says Jessica Caldwell, Edmunds executive director of industry analysis.

Analysts at Edmunds focused on traffic data to see which automaker won the most attention among car shoppers. The company measured lifts in unique traffic to each advertiser's brand and model pages on Edmunds mobile and desktop sites. Lifts were determined by comparing against average Sunday traffic to Edmunds.

The show continued to be a place where luxury automakers shine, and both Cadillac and Mercedes saw traffic lifts at the brand level (13% and 7%, respectively). Cadillac’s TV spots did not focus on a specific vehicle, but instead promoted the overall brand. Mercedes promoted both the overall brand and the GLC Coupe.

"The Oscars are a magnet for luxury brands who are trying to align themselves with an affluent, aspirational audience,” Caldwell says. “The fact that both Cadillac and Mercedes saw immediate traffic gains is significant, as the ads were more about selling a lifestyle than selling a car.”