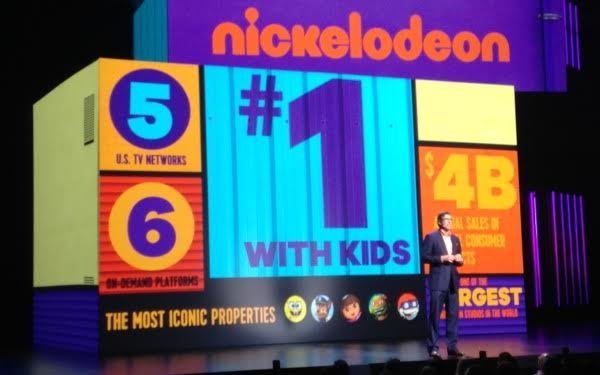 The long season of TV network upfront presentations kicked off Thursday in New York with Nickelodeon announcing plans to air as many as 700 new episodes of both new and returning series in the coming year.

New shows announced by Nick include a new “Ninja Turtles” franchise -- “Rise of the Teenage Mutant Ninja Turtles,” in which the animated characters have been reimagined and redesigned; “The Adventures of Kid Danger and Captain Man,” an animated series spun off of Nick’s top-rated live-action show “Henry Danger”; and “Lip Sync Battle Shorties,” a live-action spinoff for kids adapted from the hit “Lip Sync Battle” now airing on Spike, also owned by Viacom.

“On the most simple level, we are in the business of creating lasting IP [intellectual property] to connect with the audience wherever they are,” said Nickelodeon Group President Cyma Zarghami on stage at Jazz at Lincoln Center’s Frederick P. Rose Hall.

“And now we’re working on ways we can expand beyond our ecosystem and beyond our screens,” she said. “We really believe there is a big shift in the way people are marketing to every audience and how brands are working hard to connect with those audiences.

"And we’ve learned that the physical manifestation of Nickelodeon is really of great value to both us and to the audience.”

Among the initiatives Nickelodeon announced is its ongoing expansion into branded resort development for family vacations, starting with the new Nickelodeon Hotel & Resort in Punta Cana, Dominican Republic. More such resorts are on the way, said Pam Kaufman, Nickelodeon CMO and president of consumer products.

The upfronts will now go until the conclusion of the annual presentations in mid-May by the major broadcast networks. Unlike past years, however, only one other Viacom-owned cable network will be holding an upfront this year -- BET -- scheduled for late April.

The cutback in upfront events could be seen as another sign of entrenchment in the Viacom group of cable networks.

Last month, Viacom Inc. President and CEO Bob Bakish announced that the company is adopting a strategy in which six of its many cable networks will be earmarked for greater attention and investment than the rest. Nickelodeon is one of the networks he named the “Flagship Six.”

Bakish referred to the new strategy in remarks he made as the first Viacom exec to appear on-stage at Nick’s upfront. “Last month, I laid out our go-forward strategy for Viacom, which was a major step towards positioning our company for future growth and success,” he said.

“[With the new strategy], we’re going to realize the full power of our brands, revitalize and elevate our approach to content and talent, deepen our partnerships, make big moves in the digital and physical worlds, and continue to energize the organization internally."

He called the cabler "a great example of this plan in action.”