The United States fell three positions to rank No. 7 among the world’s “best countries,” according to an influential nations brand research study released Tuesday by Y&R, Wharton and U.S. News & World Report.

The study, which was conducted by Y&R’s BAV Consulting unit, is the second annual report and ranks the 60 best countries in the world based on an array of vital criteria ranging from perceived power and economic influence to citizenship and quality of life.

While the U.S. remained the No. 1 “most powerful” country, just ahead of No. 2 Russia, the slip in its overall ranking reflects changing perceptions following the election of Donald J. Trump as president.

“We wanted to capture how tumultuous political change affect a country’s perceived standing in the world,” stated Brian Kelly, editor and chief content officer of U.S. News. He likens the country rankings to the kinds of rankings the publication is known for publishing about hospitals, universities and other institutions.

Y&R, whose BAV (Brand Asset Valuator) unit is highly regarded on Madison Avenue for its research, has long helped advise and consult some nations on their brand proposition, but this report represents an objective measure to evaluate the perceived quality of various nations overall.

The U.S.’s year-over-year slide no doubt reflects some of the political turmoil following the presidential election, according to the study’s authors, who noted: “Nearly 75% of survey respondents said they lost some respect for U.S. leadership after the 2016 presidential election.”

Worldwide civil and political unrest was a major theme in the rankings, according to the authors, which may help explain why Switzerland -- a country known for its neutrality -- debuted at No. 1, and why Canada remained No. 2 on this year’s list.

Interestingly, the U.K. does not appear to have been disrupted too much by Brexit. The U.K. remained No. 3 in the world ranking, suggesting that the initial shock of its vote to leave the European Union may have stabilized in people’s minds.

Conversely, Germany -- which was last year’s No. 1 -- slipped three positions to No. 4 this year, likely due to growing anxiety stemming from an influx of refugees and a string of terrorist attacks.

“Our data captured widespread global concern for the social and geopolitical changes that cast many nations into uncertainty and turmoil,” concludes John Gerzema, chairman and CEO of Y&R’s BAV Consulting, adding: “The new rankings reflect people’s desire to restore some sense of order by rewarding nations they perceive as championing neutrality, stability and diplomacy.” 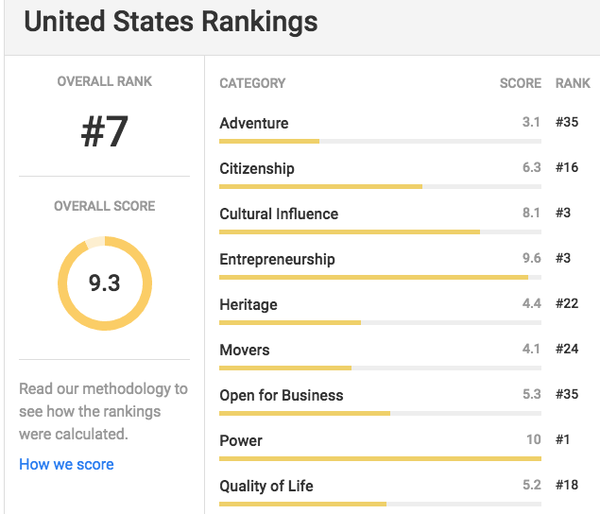