Have U.S. Politics Made It Easier For Machines To Understand Humans?

It’s coming. The “futurists” are saying that the hype about artificial intelligence is real. The reason, according to Andrew Ng, chief scientist at Baidu, is that AI is no long a “magical thing” but is now creating real value for companies, like Google and Baidu. Companies are now finding “pockets of opportunity” to invest in AI.

But there's also something else at play that is making the timing right for AI: Americans are now living in a highly polarized political environment. We’ve seen it play out in TV commercials, “resistance movements,” and daily news coverage.

At the same time, researchers have recently shown that it’s more than a person’s mindset that determines their political beliefs; it’s the actual mind itself. More specifically, the physical structure of the brain of those people on the ”right” and the “left” are different, and it impacts how information is interpreted, decision are made and how they see the world.

As a result, the adult world is made up, to a certain degree, of two hard-wired types of people, who see and interpret the world differently. In fact, according to the Pew Research Center, there has been a dramatic political polarization of Americans over the last 20 years (see the graph below). 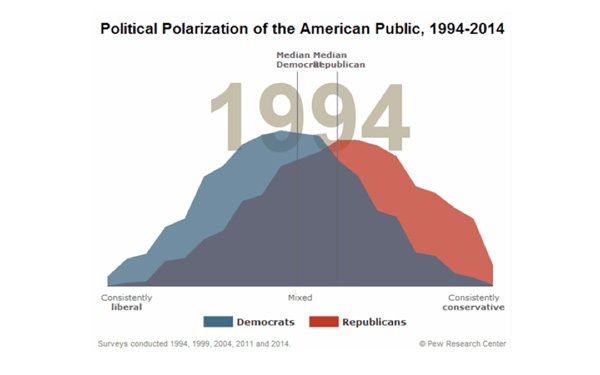 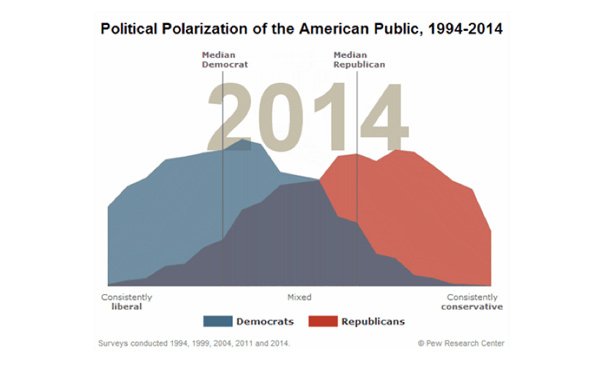 Put it all together and you have a perfect scenario for AI machine learning. Machines look for consistency in patterns to make predictions, and apparently we have become more predictable than ever before. Using psychographic segmentation along with online research tools, machines can more accurately and effectively target and message to unique audience segments.

Our minds are already predisposed to interpret information differently. Layer on that the fact that our opinions and beliefs are becoming more distinctly aligned with other like individuals, and you’re seeing the “middle” is disappearing.

These distinct groups also use unique channels for information and communication that reinforce their beliefs and opinions, making it easier to find and message to them. In the end, the target, channel and message are all becoming increasingly more defined as a result.