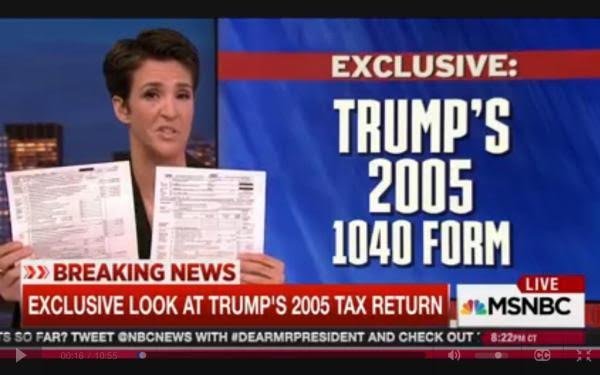 You can't make this stuff up. It really happens, day after day and night after night on TV news.

By now, almost everyone has had this experience. You're casually watching TV news on a typical evening -- maybe one of the talk shows on the news channels or perhaps one of your local station newscasts -- and you hear or see something that has you wondering if you're watching news or a satire of the news.

Frequently, the answer is: It's the real thing, but it feels like a parody. Yes, ladies and gentlemen, TV news has finally accomplished the goal toward which it has been heading for its entire history: It is now a full-blown satire of itself.

I had this epiphany Tuesday night some time between 10 and 10:30 p.m. At some point, a promo came on for one of the local New York newscasts coming up at 11. The anchorman's voice was ballyhooing the “breaking news” that someone had leaked one of Trump's tax returns. “More at 11,” the anchorman promised.

I had not heard this news until this promo. Not willing to wait until 11, I figured it was probably Topic A on the news channel chatterbox shows, so I went in search of it on MSNBC, CNN and Fox News Channel.

MSNBC was in a commercial, although I was to learn later that this is where the Trump tax return story originated -- on Rachel Maddow's show earlier in the evening (pictured above).

On CNN, Don Lemon and two guests were talking about something else (I think it was Trump and the Russians -- again).

On Fox News, Sean Hannity and two guests were digging into the tax-return leak story with a discussion that was less about Trump's 2005 taxes and more about MSNBC's corporate parent -- NBC -- which Hannity insisted was waging a war on Trump. The “Hannity” show even had a special on-screen logo produced for the occasion with the words: “NBC’S CORPORATE JIHAD.”

The problem was, I never learned what the actual story was about either from “Hannity” or from any other TV news source at that time.

After giving up on this quest, I tuned back to one of our local newscasts for more local news (it was the 10-11 news on Fox 5) just in time to hear the anchorwoman announce something like: “Have you ever seen a dog play ice hockey? Well, it's on YouTube and it's gone viral! Coming up after the break!”

It was like something you would see on the Kent Brockman news on “The Simpsons.” But as everyone knows by now, YouTube clips of ice-skating canines and cats dancing the cha-cha are all the rage on TV news -- especially local newscasts. What constitutes “viral,” anyway? A hundred views, a thousand, a million? Who knows?

Remember all the talk back in the late ’90s that the new millennium would usher in a new Information Age? Well, that didn't happen. Instead, the era we now live in is a Disinformation Age or a No Information Age.

Maddow's “scoop” was a case in point. She had two pages of Trump’s 2005 tax return. The “news” was that he paid approximately $38 million in taxes on income that year of $150 million. OK, that is something we did not know before. But at the same time, this “news” seems valueless, in fact.

But it certainly had value as fodder for Maddow's talk show and for the Lawrence O’Donnell show that came after it. Among other segments, Maddow conducted an interview with the investigative journalist, David Cay Johnston, who said he received this tax return document in his mailbox from a sender he either didn't know or won't identify (I think he's going with the former).

Far from reporting the “facts,” he and Maddow then went on to have a lengthy discussion speculating about all sorts of things related to Trump. Johnston even suggested that it may have been Trump himself who sent the tax documents to him for reasons that were not clear. Johnston and Maddow then went on to speculate that Trump is hiding his ties to unnamed Russian oligarchs. No evidence of this was ever offered.

A few minutes earlier, Maddow insisted she was not reporting “fake” news. “Pinch me, we're real,” she said, as she dramatically pinched her own forearm.

On Fox News, Hannity ridiculed Maddow. After accusing NBC News of carrying out “a flat-out conspiratorial attempt to smear the president,” he said of her: “Now, I really couldn't watch [Maddow earlier in the evening] with a straight face. It was sort of like an ‘SNL’ skit, but actually better.” He's not wrong about that, but he should lump himself into the same category.

Some time on Wednesday, it came to light that the National Weather Service realized at some point on Monday that the blizzard that had been forecast for Tuesday in the northeast would probably not occur. Instead, it would be just a regular snowstorm. But the NWS didn't reveal its forecast because it didn't want to interfere with all of the plans local governments had already made for dealing with a blizzard emergency.

So now, you can't even trust the weather news on TV.

Oh, and just in case you haven't been in tune with international news lately, here's the top story making news around the globe: An expert on east Asian politics was interrupted late last week by his cute kiddies while appearing via Skype on the BBC. The video went “viral” (or so they say) and the rest is TV satire.