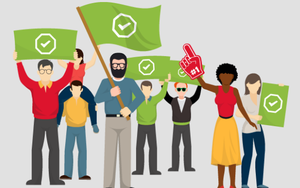 Units of WPP, Omnicom and Publicis, and at least one major advertiser, have signed on as charter members of controversial ad blocker AdBlock Plus’ Acceptable Ads Committee.

The announcement, which was made by Cologne, Germany-based eyeo, the parent of AdBlock Plus, is intended to be an independent committee that will take over control of AdBlock Plus’ equally controversial “acceptable ads” program, a de facto ratings system setting standards for the placement, “distinction” and size of ads deemed acceptable to AdBlock Plus users.

The committee also represents a step by AdBlock Plus to defuse criticism that it is trying to assert a gate-keeping role in determining which ads are acceptable or unacceptable to be rendered on user’s browsers.

Computer and technology marketer Dell is the sole advertiser on the committee, and the agency units include: WPP’s J. Walter Thompson Worldwide, Omnicom’s TLGG and Publicis’ Saatchi & Saatchi.

A variety of ad-tech middlemen such as Rocket Fuel, Native Ads Inc., Sharethrough, The Media Trust, and Criteo are also on the committee, which eyeo describes as responsible for setting the “criteria and the compromise between users who want to block intrusive ads and publishers who rely on advertising revenues.”

The company said the application process for joining the committee is “still ongoing and continuous.”

MediaPost named AdBlock Plus its “Media Supplier of the Year” for helping to bring attention to the role ad blocking, and new business models related to it, represent to digital advertisers, agencies and publishers.