The Association of National Advertisers has called on digital “walled gardens” -- platforms that intermediate their users’ identities with advertisers who target them through the platform’s closed ecosystem -- to “allow independent audits” by industry audience ratings self-regulatory watchdog, the Media Rating Council (MRC).

The ANA issued an advisory calling on the platforms and explicitly citing the likes of “Amazon, Foursquare, Instagram, LinkedIn, Pinterest, Snapchat, and Twitter,” following a member survey, which found that 90% favored independent audits by the MRC.

The two biggest walled garden players, Google and Facebook, already are complying with MRC audits, although they also have both had issues with restatements of their audience estimates in the past year.

The ANA’s call is a recognition of the increasing role, influence and market power that such walled garden have in targeting consumers based on so-called “persistent IDs” owned and controlled by the platforms, but generally not disclosed to advertisers and agencies that acquire audience reach through them.

“In advance of the just-completed ANA Media Conference, we asked ANA members for their perspective on recent developments related to walled gardens,” the ANA said in an advisory sent to members and the press, adding, “The specific question was: ‘A walled garden is a platform where the carrier or service provider has control over applications, content, and media, and restricts convenient access to non-approved applications or content. Facebook and YouTube are two examples of walled gardens. Recently, Facebook and YouTube announced that they would break down their “walled gardens” and allow independent audits by the Media Rating Council. What’s your view of these developments for the advertising industry?’

“The results: Eighty-nine percent of respondents view these developments as positive for the advertising industry — 57% very positive and 32% moderately positive. Meanwhile, 8% were neutral, 3$ were moderately negative, and no one was very negative.”

The ANA said 113 members responded to the survey, whom cited “more transparency from vendors on data and performance,” “so metrics can be validated by a third party and aren’t only self-reported,” comparisons “within the wall to outside it,” the development of “holistic plans that cross multiple platforms,” “walled gardens are blind spots,” as chief reasons for “very positive” responses to its question. 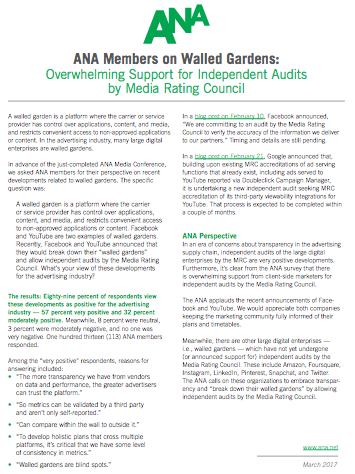