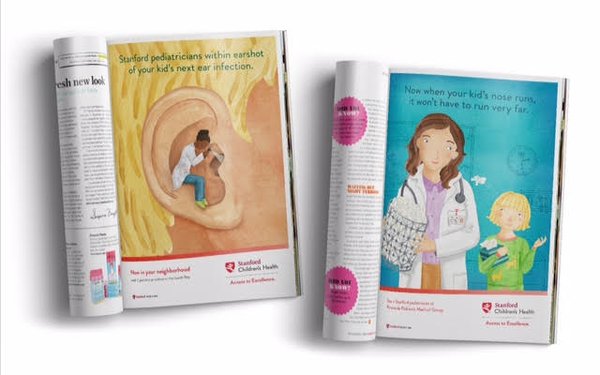 Stanford Children's Health and its agency Hub Strategy & Communications are refreshing the hospital's brand campaign to emphasize the elevated level of wellness care provided by Stanford pediatricians at local practices.

The "Access To Excellence" creative moves away from happy smiley photos of babies to feature animated characters at a hospital with a voiceover discussing how to find a healthcare provider.

“If you look at the healthcare industry, the advertising all looks the same," says O’Neil. “We developed a unique style that draws inspiration from the imagery in children’s books in order to have our advertising standout against a sea of stock photography that dominates the creative in the category.”

Videos appear online and on local PBS stations this summer. The print ads will be featured in regionally-targeted publications including the Bay Area News Group newspapers, Bay Area Parent, and Active Family.

"Because this leg of the campaign is more focused on the local pediatric practices that make up the overall SCH network, our media strategy is much more geo-targeted not only online, but in the Bay Area print and newspaper publications and even hyper-localized outdoor in transit areas like BART [Bay Area Rapid Transit] and in-store at neighborhood/community locations," says O'Neil.

The campaign has produced strong results and accolades. Unaided awareness has nearly doubled at 17% since before the fall 2016 launch. Familiarity with the hospital has increased by 18 points and consideration is up 15 points, says Hub. Organic and paid brand search queries have shown increases between 40%-70%.

Mediasmith serves as the media buying and planning agency for the brand.