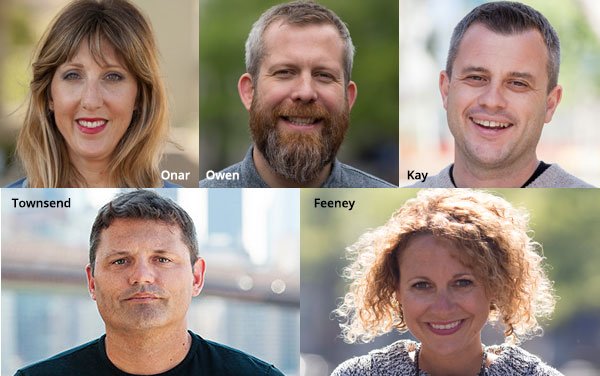 Townsend was elevated to managing director, New York in 2014 after working as group brand director in Los Angeles. Most recently he helped his New York staff move into its new 50,000-square-foot office, located in an old coffee warehouse, in Brooklyn that comes with a deck where the agency plans to plant its own organic vegetable garden.

Managing director Kay will add oversight to international responsibilities in addition to his new role as partner. He first joined the agency in 2013 having worked at TBWA, Fallon London and for the Manchester City Football Club.

Onar most recently served as chief talent officer having joined the agency in 2012. The agency credits her leadership with overhauling its employee programs, including introducing extending parental leave.

Feeney joined the agency's Amsterdam office in 2012 after beginning her career at Amnesty International, TBWA and Fallon in London. She is credited with helping push the agency towards more social advocacy and campaigns infused with purpose.

Owen has served the managing director of the Amsterdam office since joining 72andSunny in 2013. He previously spent time at Wieden+Kennedy in London, Mother and Anomaly in New York, representing clients including Nike, Nokia, Diageo and British Airways.

"We’ve nurtured a culture of bravery, generosity and entrepreneurship, combined with business strategy and unyielding optimism," said John Boiler, founder, creative co-chair, 72andSunny. "These are all qualities that our expanded global leadership team has in abundance."