'Peanut' Tillman Lives Up To His Name In New Campaign 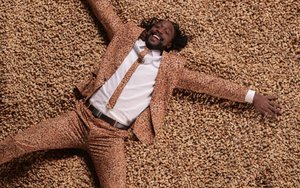 In a probably inevitable match-up, former NFL player Charles “Peanut” Tillman is starring in a new campaign for the National Peanut Board, dubbed “Shell Out.”

The centerpiece of the campaign, from Golin, is a video showing Tillman dressed in a suit made of peanuts, cannonballing into a vat of peanuts.

“Does promoting peanuts make me a sellout? No — but it does make me a shell out!,” puns Tillman, a cornerback for the Chicago Bears and Carolina Panthers during his football career.

The #ShellOut video is being featured on the board’s Twitter and Instagram accounts, as well as its site.

Tillman, who says that his nickname actually did originate because of his obsession with peanuts, is encouraging other peanut lovers to post about the popular legume using #ShellOut.

On social and the site, he is also offering creative ways to “shell out,” such as eating peanut butter for breakfast every day, adopting a rescue dog and naming it Peanut, or covering your body in peanut butter and taking a selfie (“Even better, do it with a group of friends”).