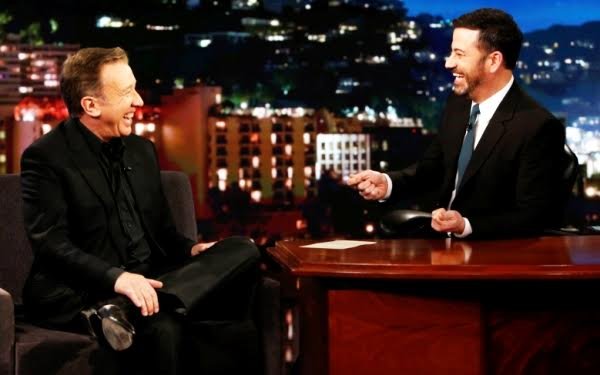 Tim Allen never once uttered the "N word" in decrying the intolerance that grips Hollywood these days.

The "N word" in this case was “Nazi,” but instead of invoking the word itself, Allen made a remark comparing Hollywood to " '30s Germany.”

He made this comment Friday night on “Jimmy Kimmel Live!” on ABC, the network that airs Allen’s hit sitcom “Last Man Standing.”

His statement made news over the weekend because it’s rare for such a high-profile personality to publicly criticize Hollywood’s lockstep liberalism.

That Allen issued this critique comedically was lost in some of the stories posted during the weekend. “Tim Allen compares Hollywood to Nazi Germany,” said the headline on the New York Post’s Web site -- applying the word “Nazi” to what Allen “said,” even though he never said “Nazi.”

The headline made it seem as if Allen made this remark in some sort of solemn, erudite setting instead of a comedic late-night show. The truth is, he delivered these remarks with a laugh, in the manner of a comedian doing stand-up.

The Post's story went on to describe Allen's role on “Last Man Standing.” On the show, he plays a journalist specializing in outdoor sports who rails about various social changes in society -- particularly their effect on traditional notions of masculinity.

“Allen, 63, plays an outspoken conservative on the sitcom ‘Last Man Standing,’ and is one of the few actors in Hollywood to profess having right-wing leanings,” said the story, which named no instances when Allen may have “professed” these “leanings.” Maybe he did, and maybe he didn't.

Allen made his remarks on “Kimmel” in the context of a conversation in which Allen said he attended various festivities in January in Washington surrounding President Trump’s inauguration. Allen said he appeared at an event for veterans. He also watched the inaugural parade.

In this context, Allen humorously noted that when some people in Hollywood hear he attended inauguration festivities, they have a negative reaction.

This portion of the conversation started when Allen told Kimmel he attended these events, and then comedically went on the defensive. To which Kimmel reacted with a laugh: “I'm not attacking you!”

Then, here is what Allen said, while laughing all the way:

“You get in this town … I'm not kiddin’ … You gotta be real careful around here! You know, you get beat up if you don't believe what everybody believes! This is like ’30s Germany! I don’t know what happened …! If you're not part of the group, you know … ‘What we believe is right!’ I go, ‘Well, I might have a problem with that!’ I'm a comedian, I like going on both sides …”

You can watch the whole thing here.

Never once was the word “conservative” uttered during this conversation. And yet, here's how Deadline.com headlined their story: “Tim Allen Compares Being A Conservative In Hollywood To ’30s Germany.”

Well, maybe this is a fair interpretation. But it's also true that, technically, he never really said anything along the lines of: “I'm a conservative, and from the way I'm being treated in Hollywood, you would think I was a dissenter making my views known publicly in the Nazi Germany of the 1930s.”

Needless to say, the story was blown out of proportion, which is really what happens all the time today. Reactions today -- to so many things -- become overreactions almost on a routine basis. It’s one reason why discourse -- or what passes for discourse -- is so fraught with tension.

In a world in which every little thing is overblown -- including what a sitcom comedian says humorously on a comedic late-night show -- the first casualties are understanding and reason.

Whatever Allen said, and however much he meant it, good for him for speaking his mind. As one willing to say such things in intolerant Hollywood, he just might be the last man standing.