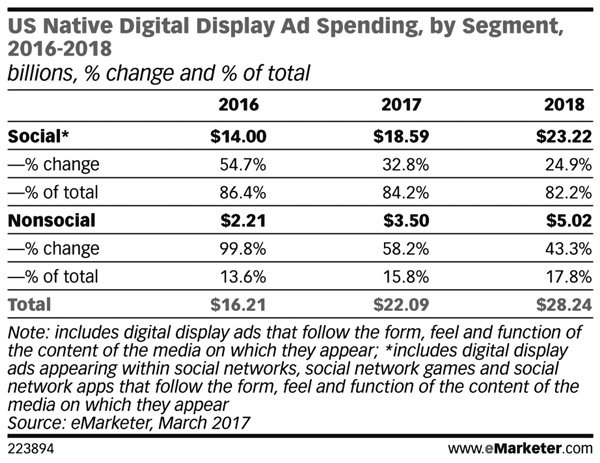 “With native dollars now the majority of digital display ad spending in the U.S., it’s clear that native isn’t just a trend. Social sites such as Facebook and Twitter have provided the blueprint for how native can be scaled and relevant for nearly all brand types, and it’s hardly surprising to see publishers transitioning to that in-feed style to improve their user experience and move away from heavy reliance on standard banner ads,” Lauren Fisher, principal analyst, eMarketer, told Native Insider via email.

By contrast, BI Intelligence anticipates that native ad revenue will comprise 74% of the total U.S. display ad revenue by 2021. This aggressive projection is attributed, in part, to programmatic technology, which advertisers are relying on to scale native campaigns.

As you might expect, Sharethrough, a native advertising technology platform, is bullish on the forecast: “Native is eating the advertising world. eMarketer’s new report puts numbers to that story: with 40% yearly growth for native advertising on the open Web, beyond the social platforms,” Dan Greenberg, CEO and Co-founder, Sharethrough, told Native Insider via email. “eMarketer predicts $12 billion in growth for native across 2017 and 2018 into what will soon be an almost $30 billion industry, as traditional display and outstream video transform into native display and native outstream video,” Greenberg added.