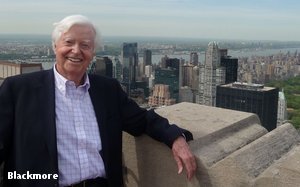 Robert “Bob” Blackmore, who reigned as head of advertising sales at NBC during the Peacock Network’s glory days, died March 9. He was 90.

Blackmore, who began his career as a page and a sales service representative for CBS, joined the NBC Television Network in 1953 as a sales supervisor with NBC Films and quickly moved up the ranks, serving as the sales exec for the“Today” and “Tonight” shows, before moving into the network sales division and ultimately rising to executive vice president in charge of sales.

Blackmore set a new record during the 1985-86 prime-time upfront marketplace, delivering the first $1 billion upfront season for a network.

After returning from NBC in 1994, Blackmore remained active in the industry and helped found Studio One Networks, a pioneer in digital content marketing, with Andrew Susman in 1997.