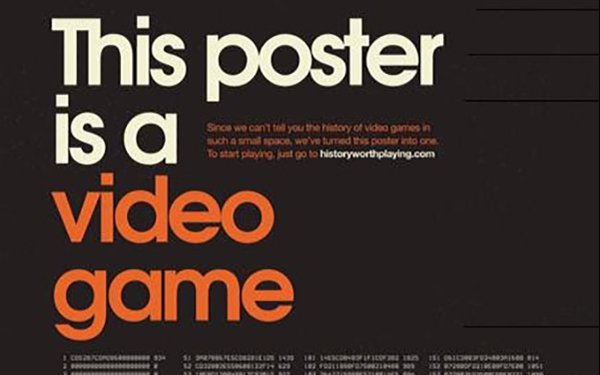 The Computerspielemuseum, a video game museum in Berlin and its agency DDB Spain are celebrating the museum's 20th anniversary with an innovative campaign that the makers claim includes the first videogame of the 21st century to be distributed via over-the-air radio waves.

The campaign centers on the ZX Spectrum, one of the computers exhibited in the museum and one of the first mainstream audience home computers in Europe in the 1980s (it's likened to the Commodore 64 in the U.S.).  The British computer sold millions of units in the UK, and Europe.

To recognize the device's 35th anniversary, the campaign invites people to use their own Spectrums while listening to radio ads broadcast in Spain, Germany and the UK. When the ad airs, people who own a Spectrum and a cassette recorder can record the ad which transmits data that can be used to play a videogame on the old computer.

The campaign also works without a ZX Spectrum. The game can be accessed via smartphones and by visiting a website using a regular PC. The website features an interactive Museum Guide, a 48KB game that lets users explore the museum and museum-related activities.

Alex Adema and Guille Ramirez, creative leaders of the campaign at DDB Spain stated that "Music and sounds are some of the most powerful ways to connect with nostalgia so this [game] loading sound [from the radio ads] will connect with millions of people who spend hours of their lives waiting for a game to load."

Offline, the museum will host a permanent installation that allows visitors to tune to the radio frequency, record the distinctive-sounding download and play the videogame. The campaign website, as well as posters, print ads and direct marketing have been launched in German and English. OOH appears on Berlin streets with machine code columns to download the game. And radio ads are also broadcast in Spanish.

The campaign has been shared by influential gamers on social media, who received a limited-edition cassette including both games, and has been shared for free by radio stations that have been experimenting with the radio ad in culture & tech programs.

The agency had to solve some problems in creating the retro videogames "We wanted to use only 15 seconds of the radio ad for the game data, and that means we only had 2KB. But we succeeded in creating a really small and fun game, that even hides a promotion and a cool animation at the end of the game,” said Adema.

Also the campaign needed to appeal to those that have never heard of the ZX Spectrum. "So, the campaign’s website had to work as a ZX Spectrum: it reacts to the loading audio -that anyone can record with a standard recorder smartphone app - and uploads the game, making you feel a very retro way of playing a game," Adema added.

The agency says that in part the campaign is designed to demonstrate that old, even obsolete technology is still “amazing” in its own way and should be preserved so that a new generation can experience it.