Free Advice For NBC Late-Night Publicists: Get Rid Of This Photo 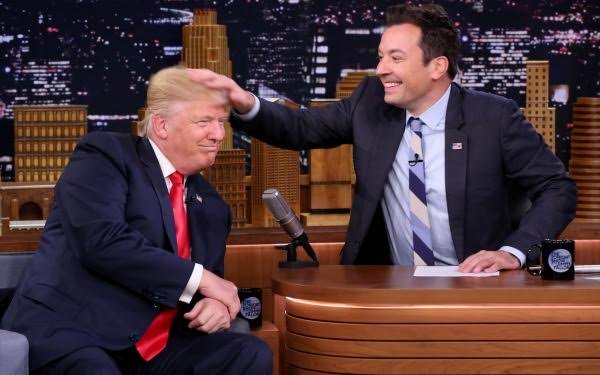 Jimmy Fallon's playful hair-tousling of then-presidential candidate Donald Trump on “The Tonight Show” last September may or may not be one of the reasons viewers are abandoning Fallon and flocking to Stephen Colbert on CBS.

But it can't be helping Fallon that so many editors and bloggers have chosen this photo to illustrate their stories about Colbert's rise to the late-night top spot and Fallon's decline.

It is not difficult to obtain this photo. Any news organization with a username and password for NBC's proprietary media site can find this photo and download it there any time free of charge.

It is one of what might be hundreds of photos from “The Tonight Show” (and from every other show on NBCUniversal's dozens of networks) on the company's media site.

In the context of stories and commentaries about Fallon and Colbert, the photo has come to represent Fallon's perceived frivolousness when it comes to politics in the Trump era.

These commentaries insist that Colbert's barbs on the subject of Trump have a sharper sting than the Trump monologue jokes delivered by Fallon, who is generally accused of glad-handing his celebrity guests with kid gloves -- including Trump during that appearance last September.

And since Trump-bashing is all the rage these days, Colbert's approach is trumping Fallon's, according to the theorizers. As a result, Colbert has been in first place for the last seven weeks.

NBC's New York-based publicists cannot stop the ornery “press” (as they were once so quaintly called) from bashing Fallon, but they could rob the critics of access to this photo if it would only occur to the publicists to take it down.

But details like this tend to elude the publicity pros of today. In days of old -- days that were not that long ago, come to think of it -- TV publicists were protective enough of the personalities they represented that they would at least make an effort to take a photo out of circulation if it wasn't flattering.

I have been on the receiving end of such requests many times in my career. And while I never agreed to stop using the offending photos, I at least had to give credit to the publicists for trying.

Removing this Fallon hair-tousling photo from the press site would not be unprecedented. The same site has many photos of Trump -- most from the long presidential campaign, including shots of Trump being interviewed on NBC News shows and participating in the televised debates of 2015 and ’16.

And I used it myself several times in TV blogs here to illustrate commentaries about Trump's checkered history with NBC. The network has had a love-hate relationship with Trump, starting with “The Apprentice” in 2004.

In 2015, the network joined the Trump boycott bandwagon after he bashed Mexicans as rapists when he announced his candidacy for president in June of that year.

NBC jettisoned him from “The Apprentice” (which by then was known as “The Celebrity Apprentice”) and severed its ties with him, giving the impression that the ban was for life.

However, by fall 2015, the lifetime ban ended when the network welcomed him back to guest-host “Saturday Night Live.” The show was awful, but it scored well in the ratings -- which Trump bragged about, naturally.

That photo of Trump next to the NBC peacock came in handy back then, and it could come in handy again. But the last time I looked on the press site, it was gone.

I wish I had saved it, but I did not. I have saved the Fallon hair-tousling photo, however. You never know when that might come in handy too -- again.

politics, tv
10 comments about "Free Advice For NBC Late-Night Publicists: Get Rid Of This Photo ".
Check to receive email when comments are posted.
Read more comments >
Next story loading