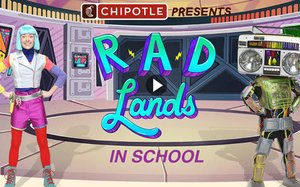 Chipotle is returning full-force to the content marketing strategy that helped build the brand.

This time, the restaurant brand is unveiling an original series designed to appeal to the families it views as critical to reviving its fortunes after its multiple foodborne-illness episodes of 2015.

While development of the series began prior to that crisis, its release comes at a pivotal point for Chipotle — which, some analysts say, may finally be showing signs of making a sales comeback.

Chipotle hopes to get parents either to pay $4.99 on iTunes for all six Season One episodes of its new “RAD Lands” video series or download the first episode free and pay $1.99 for each of the other episodes. Chipotle has said that it will share sales revenue with Apple.

In addition, Chipotle has partnered with Discovery Education — which markets free, brand-sponsored educational materials covering under-funded subjects like science, math and health to schools throughout the U.S. — to make the video series available in schools along with lesson plans and activities.

Chipotle says the goal is to educate families about nutrition and where their food comes from, in an engaging and entertaining way. The company reports that it will also donate $100,000 to the Chef Ann Foundation, which helps schools supply school lunches to kids in need.

“We don't advertise to kids, so the show is completely unbranded,” stated Chipotle chief marketing and development officer Mark Crumpacker. “We hope that it sparks conversation and curiosity among families, ideally leading to smarter and more informed choices about food.”

Indeed, the full-length, five- to six-minute videos — created with CAA Marketing and The Magic Store, the team behind the popular TV series “Yo Gabba Gabba!” — contain no outright pitches or branding for Chipotle.

But the videos’ information about nutrition and making smart food choices comes with frequent messages that align with Chipotle’s familiar messages and continuing “Food with Integrity” brand mission statement.

The thrust is the importance of choosing “real,” fresh, sustainably produced food over processed food, with inclusion of the type of unambiguous digs at traditional food makers (aka “Big Food”) that were at the heart of Chipotle’s earlier, highly effective video extravaganzas. Those included the Cannes Grand Prix-winning efforts “Back to the Start” and “The Scarecrow,” an “Ingredients Reign” campaign, and a Hulu series, “Farmed and Dangerous.”

In the first episode of “RAD Lands,” for instance, a girl on the deck of a space ship explains that she’s the communications operator for “The Cultivators,” a team devoted to “fighting to preserve nutritious food from the people who are profiting from its destruction.”

While the series won’t be promoted in Chipotle restaurants, the brand is promoting the paid, iTunes-sold videos to families via a digital ad campaign, including a teaser and a trailer that bear the brand’s name in their titles on YouTube. The first version of the trailer supplied by the brand included an opening “Chipotle presents” disclosure message, but the revised version (below) opens with a message saying it’s from “the creator of ‘Yo Gabba Gabba!”

Four of the full-length videos can be viewed on the site dedicated to the Chipotle/Discovery Education “RAD Lands” partnership.

Chipotle spent about $2 million on the series, according to Bloomberg. Chipotle also reported that it will reduce its marketing budget to about 3% of sales this year, down from 5% last year.

The fast-casual dining brand, which realized most of its rapid growth after its launch in 1993 through its popularity with the adult Millennial demographic, began efforts to woo more families at least as far back as 2009, when it added a kids’ menu.

Since the crisis, its free-offer promotions (which as a whole did little to revive sales) have included one that involved a free kids’ meal with purchase of an adult entrée. And this February, it expanded its nearly decade-old program that encourages literacy by rewarding kids who participate in reading programs with free Chipotle kids’ meals.

Light At End of Tunnel?

The new family-oriented marketing initiative, propitiously timed for Chipotle’s goal of rebuilding trust among parents, in particular, might end up helping to accelerate a long-hoped-for revival for the brand.

Comp sales reportedly turned positive in December and have stayed strong at least through early March.