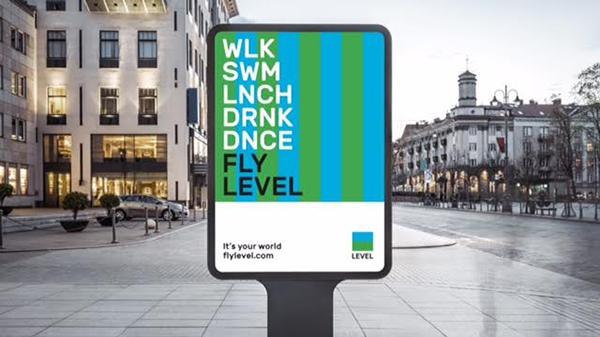 While discount airlines are common in both Europe and the U.S., low-cost nonstop flights between the two continents has yet to gain much traction. Level will offer prices as low as $149 as it flies from one airport, Barcelona, to Los Angeles, San Francisco, Buenos Aires, and Punta Cana, while costing extra for services, such as baggage and meals.

The initial creative, which rolls out this month, features bright bold colors and block lettering. The airline will be particularly active across social media. The branding is aimed at people who have “seen the world on screen” having grown up with the internet and now “want to see it for themselves," says IAG.

"How often do you get to launch a brand new, truly global, airline brand?" asks Alex Clegg, CEO, Brand Union London. "Everyone wanted to work on Level and I believe this passion shows in the minimalist design style that speaks very directly to the audience that we want to reach."

IAG, the sixth-largest airline group, was formed in January 2011 through a merger of British Airways and Iberia.