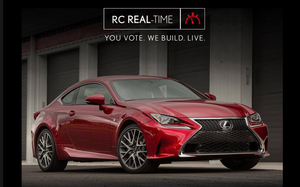 Lexus will customize an RC F Sport in real-time on Facebook Live based on votes from fans.

The promotion, RC Real-Time, will occur March 23 at 11 a.m. Eastern and is being orchestrated by Team One. Lexus will provide viewers with options for each section of the vehicle and prompt them on when to vote. Voting will take place via the comments and Lexus will display each top pick.

The luxury automaker will complete the entire build in just 10 hours, giving viewers a behind-the-scenes look at what it takes to complete a custom vehicle in just a day. Lexus is among the first automotive brands to build a custom vehicle on Facebook Live based on votes from fans. Social media users can follow the hashtag #RCRealTime to track the progress.

This is the first time the automaker has streamed the build of a car in real-time on Facebook Live, says a Lexus spokesperson.

In 2014, the brand engaged its Instagram followers to customize an RC F Sport as part of the launch of the first-ever Lexus RC at SEMA Auto Show. The RC F Sport was designed from a blank canvas, so it made sense to let our fans build their own custom performance coupe for the RC Real Time activation.

While the RC F Sport appeals to performance seekers who pursue enhanced experiences, the promotion is aimed at everyone from the auto enthusiasts who love to customize and modify cars, to the younger and tech-savvy millennials that prefer to interact with the brand socially, the spokesperson says.