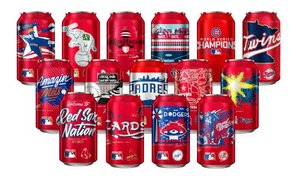 “This year, we wanted to leverage our longstanding partnership with MLB to raise a toast to the fans by giving them a piece of their hometown to enjoy right in the palm of their hand,” stated Budweiser VP Ricardo Marques.

The limited-edition MLB team cans were designed in partnership with local artists and baseball enthusiasts to reflect the personality and spirit of each local team and hometown, according to the brand.

Each design features original artwork, including images of landmarks and other elements representative of each hometown city, such as the Gateway Arch in St. Louis and palm trees in Los Angeles.

All of the designs emphasize red, white and blue with accents of silver, and in some cases, yellow.

The cans are being promoted now on the social channels of Bud and parent Anheuser-Busch, including the use of a GIF that flashes an image of each can in quick succession.