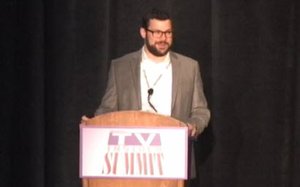 “Magna has gotten a bit of a rep as a linear TV hater, but I want to debunk that,” he said during this week’s MediaPost TV Insider Summit. “First, we still do plenty of business in linear TV. It’s really about being realists. We want to be able to track how viewers’ habits are changing. And also, when it comes to linear TV, we can’t keep doing the same thing, meaning paying more for less.”

But his most direct summary of the future came in response to being asked whether he sees television evolving over time into a performance-based medium wherein attribution analysis enables knowing that specific actions drive specific outcomes.

“Yes,” Hughes replied. “We’re doing a fair amount in the advanced TV space, as well [as in OTT], and I would call that ‘doing linear TV better.’ And I think that down the road, given what we know about people’s behavior and where things are going now, it’s very easy to imagine an app-based world versus a channel-based world, where everything is up in the cloud — a world where you can opt to watch an NCAA game live if you want to; it’s just that there’s an app for that.”

“Based on the current trajectory, we expect that the average adult 18 to 49 primetime audience rating will be less than 1.0 by next season — which is stunning,” he said. Networks’ increased pricing to make up for a decrease in supply “is challenging from our perspective,” he underscored.

This reflects “the ease of accessibility and ease of use of cloud-based IP and apps, as opposed to channel guides and menus in a traditional set-top box experience,” Hughes said. “So, we think the growth of SVOD and decline in DVR will continue.”

Another major shift: Magna estimates that fully 60% of broadcast viewing (including DVR and other streaming options) is now on a delayed basis. “We have to ask for data from partners and kind of beg, borrow steal other data where we can for these estimates, because delays in things like total content ratings are keeping us from getting that holistic view,” he commented.

Magna also projects that by 2021, about 40% of all time spent with all types of video will be through various types of streaming channels like Hulu, Roku, YouTube — “IP-delivered experiences versus the traditional linear set-top box or antenna experience.”

In addition, Hughes noted that Nielsen tracking shows that for the first time in many years, the number of channels receivable in homes decreased slightly last year, indicating that skinny bundles are starting to have an impact. “Despite the vast number of channel options available, people continue to watch just 15 to 17, on average,” he said.

Ad-Skipping Realities
With delayed viewing now dominant, and still rising, Hughes offered some key points about ad skipping behaviors and how marketers can address these.

One custom study conducted by Magna — which, while focused primarily on mobile and PCs, is nevertheless relevant to how people experience video now, he said — confirmed that people will avoid video ads whenever possible.

“I was encouraged to see that the skip rate was similar to what we’ve seen over the years with use of DVR fast-forwarding for viewing primetime programming,” he noted. Viewers skipped about 65% of ads (or conversely, a viewing completion rate of about 35%). “They’ll watch a little longer with a 30-second than a 15-second ad” — 7.4 seconds versus 5.5 seconds, on average, in this study — “but in general, as soon as they can skip, they will,” he summed up.

The good news: Using eye tracking, Magna found that even “skipped” ads garnered high attention, simply because people were still looking at the screen. “As you’d expect, however, the unskipped ads do a lot better at driving key brand metrics like favorability, purchase intent and others,” Hughes reported.

Magna’s advice to marketers based on its research: Supplement longer videos with short, non-skippable ones. This study found that six-second pre-roll ads delivered good value compared to longer, skipped ones (although the skipped ones did have value), he said — adding that the short ones do significantly better when the content takes a “story” approach.

In fact, Hughes said, the research confirms that putting story and branding right up front are important in conveying the message and sustaining the attention of people who are waiting to see a content video or scrolling through their social feeds.

“Last, if you can, tap into the viewers’ emotions,” he advised. “Ads with some kind of emotional component had better recall than ads that were more product-focused.”

OTT Test Learnings
Hughes noted “it’s very hard to get norms on how linear TV drives the kinds of metrics we typically look at when we’re doing a digital or OTT campaign.” However, he reported that one study that Magna did in-lab a few years ago found that “the key component for the viewer was that connected TV was like ‘regular’ TV, without the clutter.” Connected offers “all of the benefits of the bigger screen and watching TV-style content, but with fewer ads — which drove better recall at the end of the day,” he said.

Hughes set the stage for sharing some learnings from Magna client tests conducted with Hulu and Roku by confirming that the platforms’ demographics are quite similar, and that both have considerably younger and more affluent audiences, on average, than traditional television. (For instance, Hulu’s median audience age is 33, and median income is $84,000. Broadcast and cable primetime cable audiences’ median ages are 56 and 50, respectively; and their median incomes are $61,300 and $56,200.)

“This is not to say that the older audiences don’t have value, but if you’re looking to reach the younger segment, you may want to look at” such OTT options, Hughes noted.

Also, among Hulu’s audience, about 75% of viewing takes place in the living room. “People still like the TV screen experience, but they also like the cloud-based, on-demand app experience,” he said.

Hughes cited one cross-platform Hulu study done with a QSR client, describing it as “the first time we were able to get a really good read on that OTT portion of the audience.”

Compared to PCs and mobile, OTT yielded higher aided awareness and favorability metrics. In online ad awareness, OTT also outperformed mobile, although it slightly under-performed PCs. “Awareness is something we’ve typically attributed to the mass reach of linear television,” observed Hughes. “To me, this says that there’s something about the awareness factor that’s tied to the larger-screen,” as opposed to just being dependent on mass reach.

“The fact that mobile did slightly better on purchase intent makes sense because that’s slightly farther down the purchase decision funnel — when people are using their phones to make product and pricing comparisons and so forth,” he said. “We think it’s important to talk about OTT and mobile together because they’re the fastest-growing viewing segments in terms of platform, and because they can work very nicely together.”

Hughes also highlighted two studies with Roku. One was for a casual dining restaurant brand with a fairly broad audience target (adults 25 to 54), and the other for a non-alcoholic beverage brand with a multicultural Millennial target audience.

In each case, ads on Roku yielded significant lifts in awareness, brand favorability and other metrics (including visitation intent for the restaurant chain and recent purchase for the beverage).

“We got good results with both — and I think that goes to the power of bringing the digital targeting capabilities into the world of television to realize the best of both worlds,” he concluded.

“Measurement has been a very bumpy ride,” he said. “We still don’t have consistent third-party measurement for cross-platform. Nielsen’s TAR [Total Audience Report] definitely represents some progress, but they still can’t dedupe with mobile or dedupe OTT from the rest of the buy.” Publishers and networks are tired of struggling with all of the SDKs, tags and watermarks that are necessary to measure content and capture data for advertisers and agencies, he added.

“We need a neutral, single, open-source solution for tracking all of this material across platforms” that would allow all of the measurement companies the same ability to capture it wherever it is,” Hughes stressed. “That would solve a lot of the things that are slowing us down today.”

He lauded the Coalition for Innovative Media Measurement (CIMM) for having made major strides in solving the cross-platform problem with its Trackable Asset Cross-Platform Identifier (TAXI) initiative. “They’re pretty far along now in finding a way to bind Ad-ID — which is sort of the UPC code for ads — with EIDER, which is the same for the content side, to be able to bind that into the essence of video and capture it so that we can identify an ad or content wherever it is, digitally or other.”

The missing piece now is duration, and as the industry moves toward shorter video ads, it’s increasingly important to be able to track viewing duration and understand the value dynamics associated with it, Hughes said, noting that Magna is more than open to discussing its own ideas on this with others in the industry.