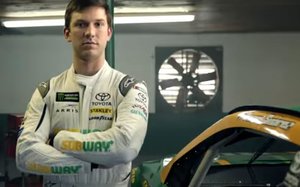 Subway is set to release a TV spot and social efforts announcing Daniel Suarez as the new driver for the NASCAR car that Subway sponsors.

Subway is the primary paint sponsor for Joe Gibbs Racing’s Number 19 car in four races during the season. Suarez is replacing Carl Edwards, the driver Subway helped sponsor for eight seasons, until his retirement at the end of last season.

The 30-second ad (below), from agency MMB, has Suarez, the first Mexican national to race at NASCAR’s highest level, talking about coming to America for the opportunity to strive to be the best.

Suarez represents the "search for better" that is one of Subway’s brand promises, says the QSR.

The ad will debut on March 26 during NASCAR’s AutoClub 400 race in Fontana, Calif. and continue to air throughout the NASCAR season.

The ad will also be featured on Subway’s social media channels.