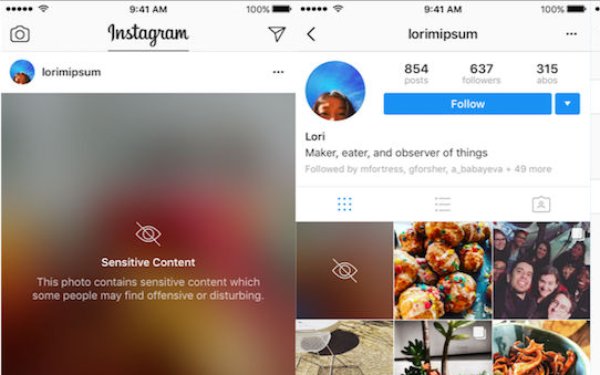 Endeavoring to make user feeds less NSFW, Instagram has started filtering select images that it considers to be ‘sensitive” fare.

“Soon you may notice a screen over sensitive photos and videos when you scroll through your feed or visit a profile,” Kevin Systrom, Instagram’s co-founder and CEO, notes in a new blog post.

“While these posts don’t violate our guidelines, someone in the community has reported them and our review team has confirmed they are sensitive,” Systrom explains.

If users would still like to see a post that is covered with a screen, they can simply tap to reveal the blurred photo or video.

The Facebook unit is also rolling out its two-factor authentication tool -- designed to add an extra layer of security by requiring a code every time one logs in -- to all users. For Instagram, the moves are part of a larger effort to cut down on crude content and user behavior.

To that end, Instagram recently began letting users disable comments on individual posts. The network also began inviting everyone to moderate comments as they see fit.

A keyword moderation tool was first offered to business users last July, then to all users in last September.

Of course, digital harassment is bigger than any one platform. Indeed, a full 40% of online users report being subjected to some form of harassment online, according to recent findings from the Pew Research Center.