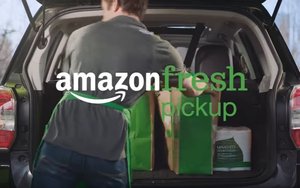 Amazon just can’t stop piling on the perks of Prime membership: The online retailer just announced that it is testing AmazonFresh Pickup, yet another physical touchpoint for the e-commerce giant. And this one offers hungry shoppers a15-minute payoff.

The service is currently in beta with Amazon employees at two different locations in Seattle, and a spokesperson says no additional details about timing or rollout are available. But the plans call for it be made available to Prime members for no additional charge.

With no minimum on the size of the order, users simply pick out their groceries, either by app or online, select their pickup time, and then cruise into the location, where an Amazon staffer loads their bagged groceries.

The announcement promises access to “thousands of grocery items available at low prices—including high-quality meats, fresh produce, bread, dairy, household essentials and more.” And it comes just days after reports that technical difficulties were causing delays in its introduction of Amazon Go, the checkout-free concept it announced last year. It’s also stepped up its introduction of physical bookstores, including the just-opened Chicago location.

Amazon already offers grocery delivery through Amazon Fresh, which it launched a decade ago. But the addition of pickup possibilities puts it in even more direct competition with brick-and-mortar stores. Whole Foods Market, Walmart, Kroger, Safeway and many other grocery chains offer similar services.

What sets the Amazon concept apart, though, is that it’s free for Prime members, providing one more reason for consumers to sign up for the $99-per-year service. There’s also no minimum order size.

New research from market research company GfK offers some insights into why that strategy is resulting in such big wins for Amazon. With Amazon Prime membership at an estimated 65 to 80 million, it’s a group that generated about $6.4 billion in revenue for the Seattle-based company. GfK says members are more likely to be women (59% versus 41%, according to its survey of some 700 Internet and mobile shoppers.) They are about twice as likely to earn more than $100,000 a year (29% of Prime members, versus 16% of non-Prime members.) And they are more motivated to buy groceries online (32%) than their non-Prime counterparts (25%).

But most of all, the research shows Prime members are shopping fiends: When tracking the number of online shopping visits they made over a five-month period and how long they spent on various sites, Prime members made 145 visits, for 13 hours, compared with 94 visits and 7 hours for those who haven’t signed up for Prime. “And Amazon is the most used shopping touchpoint even among non-Prime members,” it says.