Even Flip-Flops Are Getting Connected 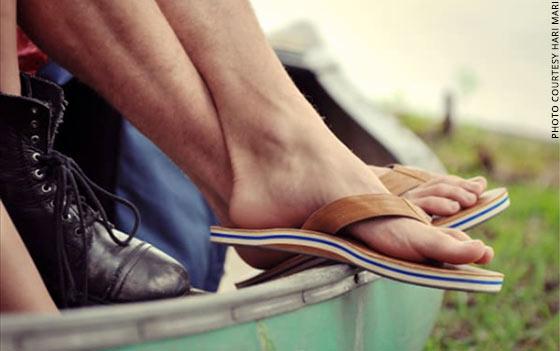 Getting from here to there in the Internet of Connected Things is not going to be easy.

A few days ago, Uber suspended its self-driving cars test after a high-impact crash in Arizona, one that knocked the car up onto its side.

The self-driving cars were back on the road a short time later, after word came out that it appeared the driver of another car made an illegal turn, for which he was cited.

Now there’s another report in the Arizona Republic that a Phoenix police motorcycle was struck by a Tesla Model X reportedly operating on autopilot.

That accident was reported to be so minor with no damage to either vehicle that no further investigation is warranted.

And then there are flip-flops.

Was tough to see this one coming.

A high-end sandal brand is introducing a new line of flip-flops with an embedded chip built in, according to reports in Fast Company and numerous other publications.

The Hari Mari shoe brand launched a new line of flip-flops in a deal with Nokona, the baseball glove maker.

The announcement from Hari Mari mentions that the flip-flops have ‘memory foam,’ but no mention of a memory chip.

The shoe has near field communication tech built in so it can pair with a mobile app to receive offers from Hari Mari, according to the Fast Company report.

Wearers will have to download an app to communicate with their flip-flops and this is only a beta test, based on a Gizmodo report, suggesting that the ultimate intent of the test is to gain email addresses of the final buyers of their products, since they are all sold through retailers.

There are many other examples.

Essentially, there’s a gap between early introduction of IoT innovations and ultimate mass adoption and usage.

The current state of autonomous vehicles and shoes you communicate with is but a small step on a very long road.

Not likely flip-flops, but plenty of connected things will be discussed at the second annual MediaPost IoT Marketing Forum  May 18 in New York.