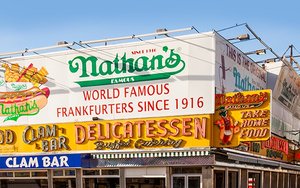 According to the National Hot Dog and Sausage Council (NHDSC), people ate more than 19.4 million hot dogs in MLB stadiums last year, a figure that could rise this season and, on average, each hot dog vendor sells about 150 hot dogs per MLB game, and 10,000-12,000 hot dogs per season.

Among all of its marketing alliances, MLB has never had an official hot dog. Until now.

“A game doesn’t feel complete without enjoying a hot dog,” Wayne Norbitz, executive board member and former president and COO for Nathan’s, said in a statement.

Under terms of the deal, Nathan’s gets use of MLB trademarks in advertising.

The company said it would soon unveil marketing, including a sweeps to “grant one lucky dog the chance of a lifetime,” as well as a potential umbrella tag, “Nathan’s and MLB: Two American Originals.”

The brand, founded in 1916 in Brooklyn, N.Y. — its original Coney Island home is at the corner of Surf and Stillwell, also named after its founders, Nathan and Ida Handwerker Way — said it currently has deals with several MLB teams, including the New York Yankees, New York Mets, Miami Marlins and St. Louis Cardinals.

Although the deal boosts Nathan’s visibility among baseball fans, it does not give it access into stadiums or with teams that have their own hot dog deals.

People who attended Los Angeles Dodgers games in Dodger Stadium last season consumed the most hot dogs in MLB, more than 2.6 million last year, according to the National Hot Dog and Sausage Council.

The Yankees were second, with more than 1.55 million hot dogs consumed, followed by the Cleveland Indians (more than 1.25 million), Texas Rangers (1.2 million) and the World Series champion Chicago Cubs (more than 1 million).

According to Eric Mittenthal, president for NHDSC, “There are challengers galore, but hot dogs remain king of the concession stand. From childhood through old age, there are two things guaranteed to put a smile on your face: baseball and hot dogs. It’s the perfect combination.”