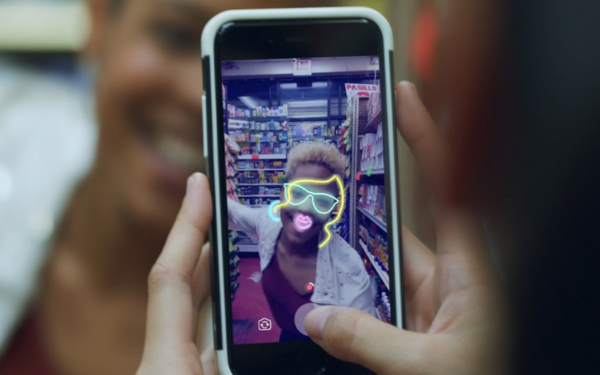 Doing its best Snap impersonation to date, Facebook just added ‘Stories’ to its flagship app. Like Snapchat’s own Stories service, Facebook’s new offering encourages users to share multiple photos and videos as part of a "visual collection" atop their News Feed.

Akin to Snapchat, Facebook also just debuted a new camera with which users can add all sorts of silly filters and editing effects to pictures and video.

“The Facebook camera is packed with dozens of effects like masks, frames and interactive filters that you can apply to your photos and videos,” Connor Hayes, a product manager at Facebook, boasts in a new blog post.

Like Snapchat, the new camera also includes “reactive effects” with which users can augment environmental changes around them like falling snow.   Facebook is working with advertisers serve up photo filters designed to market a particular product -- or simply build brand awareness -- and entertain users at the same times.

In fact, Facebook plans to use its new camera features to help promote a number of upcoming movies, including "Alien: Covenant," "Despicable Me 3," "Guardians of the Galaxy Vol. 2," "Power Rangers," "Smurfs: The Lost Village" and "Wonder Woman."

Users can find the new camera by tapping the old camera icon on the top left corner of the Facebook app, or by swiping right from News Feed.

Continuing with the Snapchat theme going, Facebook on Tuesday also unveiled Direct -- a new option designed for sharing individual photos and videos with specific friends for a limited time. “When you send a photo or video via Direct, your friends will be able to view it once and replay it or write a reply,” according to Hayes. “Once the conversation on the photo or video ends, the content is no longer visible in Direct.”

Facebook already has a history of stealing right from Snap’s playbook. Last summer, for instance, the tech titan added a Stories section to Instagram's app.

Along with a solid display-ad business, Facebook increasingly owes its success to video.

“Facebook’s users are increasingly captivated by videos on the platform -- not just on Facebook, but on Instagram as well,” eMarketer forecasting analyst Monica Peart noted in a recent report. “Video, both live and recorded, is a key driver of growing user engagement and advertiser enthusiasm.”

Peart attributes Facebook’s revenue growth in both usage and time spent, which continues to draw advertisers in greater numbers.

Instagram is also helping to drive Facebook’s revenue growth. In fact, Instagram will make up 20% of Facebook’s domestic mobile revenue this year -- up from 15% last year.