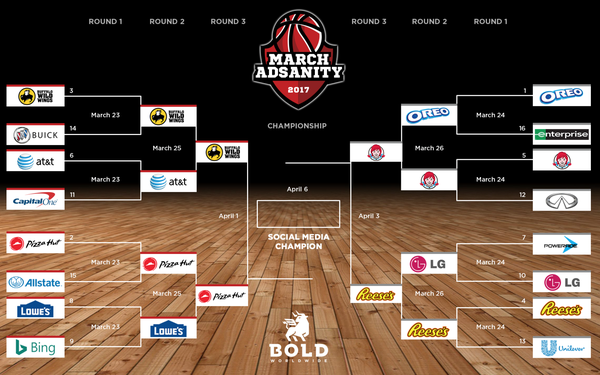 Just as the NCAA Men’s Basketball Tournament is winding down, so is Bold Worldwide’s “March Adsanity” brand competition.

The “Final Four” brands competing for the grand prize are Buffalo Wild Wings, Pizza Hut, Reese’s and Wendy’s. Brands that have been eliminated include Buick, AT&T, Capital One, Allstate, Lowe’s, Bing, Oreo, Enterprise, LG and Infiniti.

The digital and social agency took a look at the 18 official sponsors for the NCAA Men’s Basketball Tournament and narrowed them down to 16 brands by eliminating those with the lowest social following across Facebook, Instagram, Twitter and YouTube (as of March 13). The remaining 16 brands were seeded based on total followers.

“Just like in the NCAA Tournament, bigger brands (with higher marketing budgets) have the advantage, but that’s what makes the upsets more thrilling,”  Bold CEO Brian Cristiano wrote in a blog post about the initiative.

Ranked by social following, each brand competes based on actual social engagement throughout the tournament. Each day, Bold will track and record social engagement for each brand, using Pulsar CORE. Social engagement is defined as interactions with and mentions from fans on the brand’s four social channels. The team with the highest number of engagements in each matchup will win and advance to the next round.

The competition culminates in a championship on April 6, and the winner takes the title of March Adsanity Champion.

“My advice to brands competing in March Adsanity is to take risks,” Cristiano says. “Not to choose sides, but take a tip from Oreo at Super Bowl XLVII with the ‘Dunk in the Dark’ tweet. By knowing the brand, thinking ahead, and connecting the content to resonate with the NCAA audience, brands can make big waves that will make those sponsorship dollars they’re spending actually worth it.”