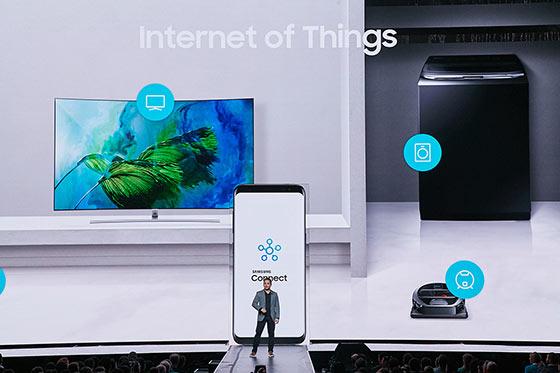 If there was any doubt about Samsung’s intent to be a force within the Internet of Things, those were put to rest Wednesday.

In addition to introducing its long-anticipated Galaxy S8 smartphone, Samsung articulated its intent for the S8 to become the controlling device for all smart things in a home.

At the phone introduction at Lincoln Center in New York, the electronics giant also introduced Samsung Connect Home, a small, smart Wi-Fi device to more tightly link all connected devices in a home.

The Galaxy S8 has all the state-of-the-art features expected in a new phone from a company like Samsung or Apple.

The phone essentially uses more of the screen, hides the home button, is water resistant, has face recognition, the new Bluetooth 5.0, and has improved speed and battery longevity.

In true IoT fashion, the phone also is loaded with sensors. The iris sensor lets the phone owner sign in by just looking at the phone, or they can use the fingerprint scanner, which has been moved to the back of the phone, just like on the Nexus and Honor phones from Huawei and those from Gionee and Le Eco in China

In addition, the phone has a pressure sensor, barometer, accelerometer, gyro, geomagnetic sensor, heart rate monitor, proximity sensor, RGB light sensor and the ability to tell the distance of the phone from your body.

All of that effectively makes the phone do lots more than make a call, take a photo or check email.

“It’s now more than a phone,” said DJ Koh, president of Samsung’s mobile business as he introduced the phone from the stage. “A new era of smartphones.”

Joining the voice assistant race with Amazon’s Alexa and Google Home, Samsung introduced Bixby, so important to Samsung that it includes a Bixby button on the side of the phone.

One of the areas where Samsung has a leg up is in all the smart or connected products it already sells, most notably the its best-selling smart TV.

When a consumer with a Galaxy S8 walks into their home with Samsung Connect, they can see on the phone dashboard all the connected things in their home. The idea is to move the interactions such as these to being voice activated.

“Ultimately, our vision is for Bixby to use Samsung Connect to control all of the connected devices in your home with your voice,” said Sriram Thodla, senior director, services and new business at Samsung Electronics America. “We’ve reimagined, to turn your phone into a universal remote for your life.”

Samsung made a large point early on in the presentation that the company works closely with Google, beyond just using its Android operating system.

Still to be seen is how Samsung bumps up against or partners with smart home devices not of Samsung origin.

And then there are Apple, Google and Amazon, all looking to occupy the same market space of being the control-the-home hub for all connected things.

Just out of the gate, the Galaxy S8 already has an advantage linking with all the other Samsung devices in the home. Still to be seen is how well its Bixby voice assistant ultimately performs.

The battle on the horizon is likely to focus on marketing.

The short-term challenge for Samsung, Apple and Amazon is to see how many consumers they can convince to buy-in to their approach, along with their associated products.

Longer term, the opportunity is for all of these smart, connected devices to work together seamlessly.

The future of the connected devices will be discussed at the second annual MediaPost IoT Marketing Forum  May 18 in New York.