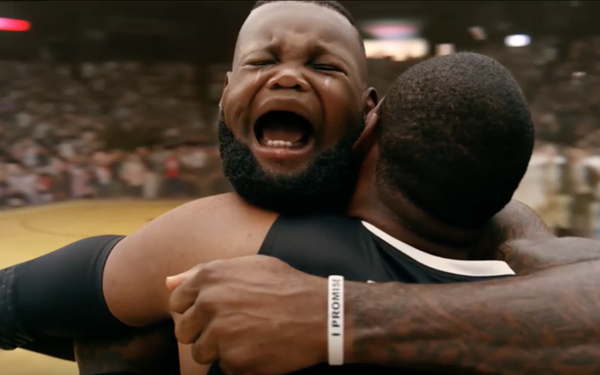 Intel is teaming with LeBron James in a humorous spot that showcases the Intel 360 replay technology that fans will experience while watching upcoming NCAA Final Four and Championship games.

The spot shows LeBron taking a three-pointer and sinking the shot just before the buzzer goes off.  Overwhelmed with emotion, James’ face morphs into a teary baby-face as Intel’s 360 replay technology catches views of it from every angle, as fans cheer in the background.

“By featuring LeBron in our marketing, we draw a parallel between our high-performance brand and this high-performing athlete, while showing how Intel technology can deliver a sports experience like no other,” said Steve Fund, Intel’s senior vice president and chief marketing officer, in a release.

This isn’t the first time the company has featured sports stars in spots. Previous efforts have included legendary football quarterback Tom Brady and Olympic swimmer Michael Phelps. Those spots “have surpassed every metric that we measure at Intel,” according to a company spokesperson. “The ads have also resonated very well with the Millennial audience.”

A new survey conducted by Intel Corporation with Turnkey Intelligence Research reveals that U.S. college basketball fans will go to dramatic lengths to watch their favorite teams and they are turning to new technologies to maximize their viewing options.

The Intel Survey, “Maximize March Madness,” finds that a vast majority of people watch college basketball at home. It revealed that 63% believe that more technology would make the viewing experience better. Of those who have experienced a sporting event in VR, 89% rate it as positive. Nearly 80% percent of college basketball fans stated they would pay 10 dollars to watch the 2017 Championship Game in virtual reality from a front row perspective. And 90% of sports fans believe 360-degree replays and VR improve the viewing experience.