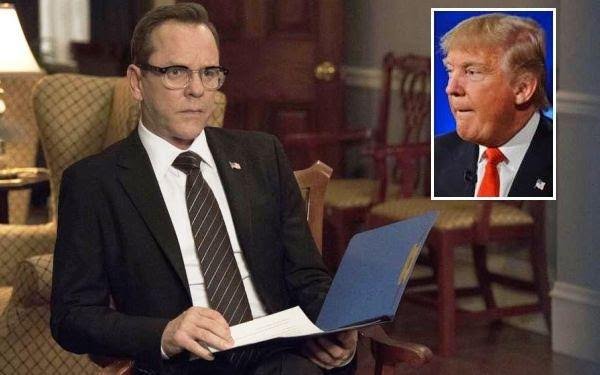 MSNBC is not the only place on TV where anti-Trump plot lines are the order of the day.

Now, scripted shows from broadcast TV to pay cable are getting in on the act, producing storylines by the boatload that reflect today's divisive politics. Or more to the point, they represent the prevailing point of view in Hollywood, which is: Trump is bad.

The trend has not gone unnoticed by Trump and his White House team, according to this New York Daily News story.

The story is a gossip-column item citing an unnamed source who says the Trump administration is “upset” about what some of its personnel have apparently noticed when watching recent episodes of shows such as “Designated Survivor” on ABC and “Madam Secretary” on CBS.

“They feel the Hollywood elite is using its power to make these innuendos about President Trump,” the story quotes its “insider” as saying. “People in the administration are upset about it.”

In “Designated Survivor,” Kiefer Sutherland (pictured on the show, above) plays a low-ranking cabinet member who suddenly becomes president when he emerges as the only government official in the line of succession to survive an attack on Washington.

He is, therefore, a president with very little experience in the highest levels of government, just like you-know-who.

In a recent episode cited by the Daily News story and a follow-up story on the Hollywood Reporter Web site, the Leoni character was groped by a fictional president -- a president of the Philippines, that is. Viewers were evidently supposed to recall the accusations last year by some women that Trump had groped them.

The Hollywood Reporter story delves even further into the topic with plot lines about questionable presidential practices on a number of shows beyond just “Designated Survivor” and “Madam Secretary.”

These shows include “The Good Fight” on CBS All Access, “Quantico” and “Scandal” on ABC, and Showtime’s “Homeland.”

With the exception of “Homeland,” I don’t follow or watch any of these shows sufficiently to pass judgment on the appropriateness of these storylines cited by The Hollywood Reporter and Daily News.

What is interesting to me is the implication in these stories that members of Trump’s administration -- and possibly Trump himself -- are always so well-informed about, and in tune with, how aspects of their world are portrayed or talked about on TV.

I happen to make my living watching TV (laugh all you want at that statement--– I’m used to it), and even I don’t have time to watch as much TV as these people seem to watch. Don’t they have better, more important things to do? The answer is: Yes.

One also wonders whether producing these plot lines is good business for these shows and their networks. In conversations I’m having with friends and acquaintances, I’m hearing more and more often that people are turning away from content that reminds them of the political turmoil we have all been living with through the media since at least June 2015, when Trump first threw his hat into the ring.

It’s no wonder that ratings are up for networks such as Hallmark Channel and HGTV. In my world, HGTV shows such as “Fixer Upper” and “Flip Or Flop” come up far more often in conversations than “The O’Reilly Factor.”

The fact is, TV’s dramas -- even on our most mainstream broadcast networks -- have long trafficked in storylines about the dark and shadowy corners of the government, although it is probably accurate to say the trend subsided noticeably during the eight years of the Obama administration.

Today, with Donald Trump and Kellyanne Conway in the White House, the floodgates are apparently open once again. I wonder what the “Property Brothers” are up to?