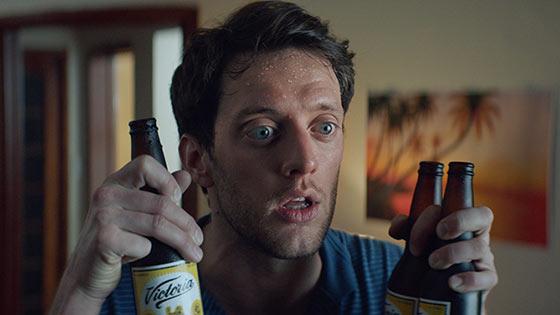 Constellation Brands is introducing the second phase of its multi-faceted campaign to promote Victoria, considered Mexico's oldest beer. The inaugural campaign was launched last year through the character Gregorio, a gringo who loves all things Mexican.

The creative builds on this “proudly Mexican” ethos by celebrating unique Mexican traditions, including its gorgeous and provocatively dressed weather girls.

The Spanish-language spot with English subtitles features a group of friends crowded around a laptop as they watch Mexico’s weather report.  Another member of their group, Gregorio - the gringo who loves all things Mexican - enters the room carrying three bottles of Victoria beer and immediately becomes enthralled with the onscreen weather girl, Yanet. After a dreamy romance, Gregorio’s friends eventually snap him out of his daydream while he echoes, “Mexico really has everything.”

Until last year, there had never been any advertising support for Victoria since Constellation first brought the beer brand to the U.S. in 2010. This changed when Constellation Brands tapped the community to introduce the iconic beer brand to U.S. audiences in 2016.

"The first campaign was well received amongst our target," says Erika Rivera, senior account executive, the community. "It connected emotionally with our consumers in a positive way due to the values it reflected, including camaraderie and acceptance. The lighthearted humor and Mexican customs and environments also added to its overall appeal and relevance with this consumer."

Marketing expenses for Constellation Brands, which also owns Modelo and Corona, is 8.5%-9% of net sales, according to financial results. "We track that very diligently to make sure that we are getting a return for it and we continue to see the returns as we invest in our brands," they say.