TV's Golden Ages: It All Depends On How You Look At Them 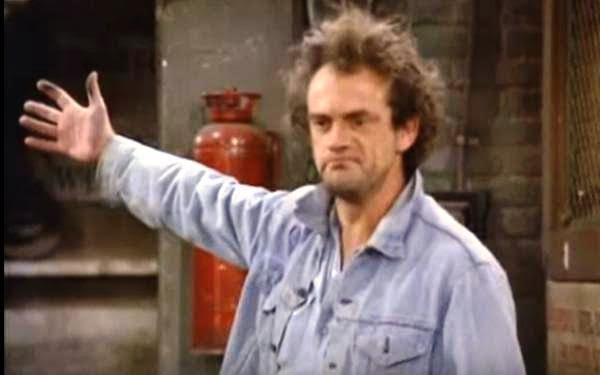 A 1982 episode of “Taxi” contains a scene that I often cite to illustrate my own personal belief that TV has had many golden ages.

In the episode titled “Jim's Inheritance” -- which first aired on Oct. 7 of that year -- Reverend Jim (played by Christopher Lloyd, pictured above) stands to inherit several million dollars when his father dies.

However, Jim's brother manages to have a court declare Jim incompetent to receive the money and, in the end, Jim is left only with a trunk containing some of his father's belongings.

Upon opening the trunk and sifting through the objects there, Jim eventually engages in a very moving soliloquy to this father -- addressing his remarks to his father’s suit jacket, which Jim has draped over the back of a chair.

Desperate to learn whether his father loved him, Jim finds an audiocassette in one of the jacket's pockets and slips it into a tape deck. The song that then plays is Stevie Wonder's “You Are the Sunshine of My Life,” a very touching song given the circumstances.

But there's a punchline, delivered hilariously by Jim, who then turns from the tape deck to the suit jacket and asks, in amazement: “You like Stevie Wonder?!”

The scene has it all -- emotion, comedy, surprise -- all within the intimacy of television, which at its heart has always been a small-screen medium consumed in the privacy of home.

Did the early years of the 1980s constitute a Golden Age of Television? Well, probably as much as any other era, depending on individual tastes.

Another scene I still vividly recall was from an episode of “Hill Street Blues” from that same era. It featured a soliloquy about suicide that may be the best single piece of television writing I have ever heard delivered on a TV drama. And I haven't heard it since it aired more than 30 years ago.

In the scene, the soliloquy was delivered by Lt. Howard Hunter, the gung-ho and often comical SWAT commander who was played by James Sikking.

But there was nothing comical about this scene, which was probably one of the reasons it was so effective. Here was Lt. Hunter being played against type and showing a side of himself we had never seen before.

Facing a distraught woman on a building ledge who was threatening to jump (she may have had a child in her arms as well), Hunter recited this soliloquy about the nature of suicide and depression -- in the process, revealing his own struggle with similar issues. It was so eloquent I can still remember the scene giving me chills.

In more recent years, an era of TV has also been draped in the Golden Age mantle. But now, so many years have gone by since the beginning of this particular Golden Age -- which many date roughly to the premiere of “The Sopranos” in January 1999 -- that it's possible to declare that even that particular Golden Age is now over.

That Golden Age was defined by a group of shows that are not around anymore -- “The Sopranos,” “Six Feet Under,” “Deadwood,” “Weeds,” “Dexter,” “The Shield” and, I am sure, others that don’t come immediately to mind.

From the premiere episode of “Mad Men” in July 2007, many people can recall the thrill of Don Draper's soliloquy about the Kodak slide carousel and how it symbolized life itself.

No one who saw the sensational final sequence of “Six Feet Under” in 2005, with Sia’s song “Breathe Me,” will ever forget that either.

Golden Ages? TV has had plenty of them, dating as far back as the beginning. Are we in one now? The answer to that really depends on what the current generation of TV viewers thinks about the shows they are watching now, and whether any of their shows will become for them memories from their distant pasts 30 years from now.

tv
7 comments about "TV's Golden Ages: It All Depends On How You Look At Them".
Check to receive email when comments are posted.
Read more comments >
Next story loading