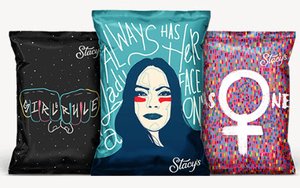 Stacy’s Pita Chips aligned squarely with women’s issues with a “Stacy’s Stands With You” campaign implemented in March to tie in with Women’s History Month and International Women’s Day.

Some of the bags — incorporating Snap codes that could be scanned to make direct calls to government representatives — were handed out during the Women’s March rallies on International Women’s Day (March 8).

The brand also made 8,000 bags available free, with registration, on the campaign’s site. Stacy’s pledged a $10 donation to Step Up, the mentoring organization for girls, for every bag that was claimed.

All of the bags were claimed in under five hours, triggering $80,000 in donations to the not-for-profit, according to the agency behind the campaign, Goodby Silverstein & Partners.

The first phase also included promotion of a contest encouraging women to submit their own designs for a chance to have them featured on a second batch of limited-edition Stacy’s bags.

On March 31, 2,000 of the bags featuring three winning designs (above), were made available online. Those were claimed within a single hour, generating another $20,000 in donations to Step Up, reports Stacy’s.

The campaign generated awareness and engagement through Stacy’s’ social media channels — including a 1:45 video featuring footage of the bags creating buzz during the Women’s March, which was posted on Facebook and YouTube (below) on March 27.

“Stacy’s Pita Chips was founded by successful female entrepreneur Stacy Madison, so celebrating the importance and strength of women is a part of the brand’s DNA,” senior marketing director Stuart Beck tells Marketing Daily. Beck declined to discuss specific upcoming plans, but said that Stacy’s “recognizes that the work to be done in support of women has to continue beyond the month of March, and will continue to be a brand that stands with women.”