Bob Guccione Jr. Is Back, This Time With A Lust For Digital 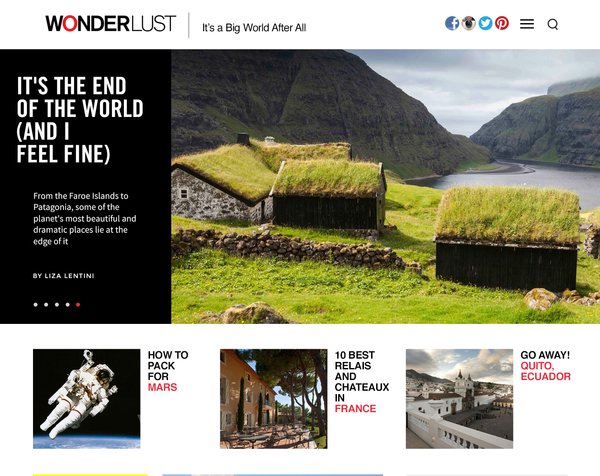 You may have heard of the Gucciones. The late Bob Guccione was the founder of adult magazine Penthouse, and his son, Bob Guccione Jr., founded Spin and Gear, and published Discover magazine.

Now, after nearly a decade away from the magazine publishing business, Guccione Jr. is back, poised to launch a digital magazine in an entirely new genre: travel.

Guccione noticed a problem with travel magazines, specifically with the two big names in the game: Condé Nast Traveler and Travel + Leisure. The coverage is “bland, generic, wallpapery-type journalism,” Guccione told me over the phone, speaking with a voice touched by an English accent and a cheery, humble disposition. Though his father was a New Yorker, the younger Guccione's mother was English and he was raised in the U.K. Now, he lives in Pennsylvania.

Guccione felt travel writing was missing an essential ingredient: humor. “There was never humor, and a life without humor is very gray,” he said.

Travel writers are on “autopilot,” who go “from one glorious trip to another,” paid for by the publication or a hotel or an airline.

The publications “make so much money they are happy to live side by side and no one is competing with them,” Guccione said.

He wants to bring back the excitement and the “sense of wonder” behind travel writing.

“We are like infants when we travel,” Guccione said, his voice filled with passion. “We have to suspend our sense of control: I’m just here, I’m learning, I’m enjoying, I’m not stressed -- I thought this was missing in journalism. It needs someone to come in and shake it all up.”

Next month, Guccione is launching Wonderlust, an online publication that will celebrate the “pleasant, joyful, exciting” side of luxury and aspirational travel.

Guccione compares his impending disruption in the niche market to what he accomplished with Spin, the funky music magazine created to juxtapose Rolling Stone -- and what his father did when he launched Penthouse to compete with Playboy.

“We are going to be the one thing that I can’t believe they’re not: entertaining, with humor. We don’t take ourselves too seriously... We are not going to forget that, and certainly not think we are better than our readers,” Guccione said.

Wonderlust will live online only, a surprising move from a seasoned print magazine publisher.

“I’m the last guy in the world who wants to not be in print,” Guccione admitted. However, the trend is “so solidly positive online, and so difficult and negative for the newsstand.”

Guccione confessed that he is not an expert on digital magazines, but the challenge of learning “keeps me vigilant,” he laughed.

And while he demurs about his digital expertise, Guccione knows how to tell a story. He firmly believes that to succeed in this business you need to have quality editorial and tap into a niche market.

“I believe the quality of what we produce will make [Wonderlust] successful. I’ve been saying for several years to everybody who will listen to me: the future of online media is quality and niche. There will be a place for scale, but only at the level of ESPN at 90 million uniques,” he said.

“Some [publications] have just the quality or just the niche -- but to really succeed you need both,” he added.

The aim is to one day reach 3.5 million monthly uniques, similar to what Condé Nast Traveler attracts.

Guccione said Wonderlust will prioritize “superior storytelling,” above all else. Typical stories range from a list of the best private islands to rent, a time-lapse video of the Ice Hotel in Sweden melting, and a profile of the city of Jodhpur, India.

“I never use the word ‘content.’ I use the word ‘editorial.’ I want my writers to think higher and try harder, and content is styrofoam chips in a carton. Cornflakes are content,” he said.

Wonderlust will focus on a more traditional relationship with brands. “For all of the bells and whistles and the latest craze and big data and this kind of customization and programmatic, ultimately advertisers say: we want focus, quality, a real audience and engagement,” Guccione said.

The goal is for Wonderlust to provide advertisers with an audience that “will actually travel,” giving advertisers “real value.” Luxury travel in particular will provide opportunities for high-end travel or luxury goods advertising.

Guccione finds it shocking that engagement is measured in how many seconds a reader spends on a page online. “That’s not real engagement,” he said.

Guccione said he's not interested in scale, which most advertisers find “inefficient.”

He also does not believe in ad blocking. “If you ad block, you don’t read us. Unblock, and you read,” he said.

The target audience for Wonderlust will be primarily baby boomers and generation Xers in their 30s or early 40s. They will likely be well-educated and wealthy: people who have disposable income, can afford to travel and stay in nice hotels -- and perhaps be fans of watching Anthony Bourdain’s travel and food shows, Guccione said.

Guccione is no stranger to this target audience. His father owned one of the biggest mansions in Manhattan, and in the '80s made it onto the Forbes 400 wealth list.

But what about millennials, a demographic publishers usually love to lure to their sites? “I think that chasing the millennials all the time is a siren song, because millennials are constantly changing their interests. You’re at an age and a time of life when a person is rabidly curious and insatiably consuming information. Interests change almost hourly,” Guccione said.

Wonderlust is establishing a stable of freelancers around the world to write stories for the site.

Guccione said he already has about 200 articles, mostly written by journalists from his impressive network.

His team is made up of a dozen “core” people, including Luke Barr, a former Travel + Leisure editor, who will serve as Wonderlust’s editorial director. One of the founding staff of Medium, Saul Carlin, will be the business development director.

Guccione has tapped these experts partly to compensate for areas where he admits a lack of experience. Barr “knows travel,” Guccione said. And Carlin is “savvy about online media.” 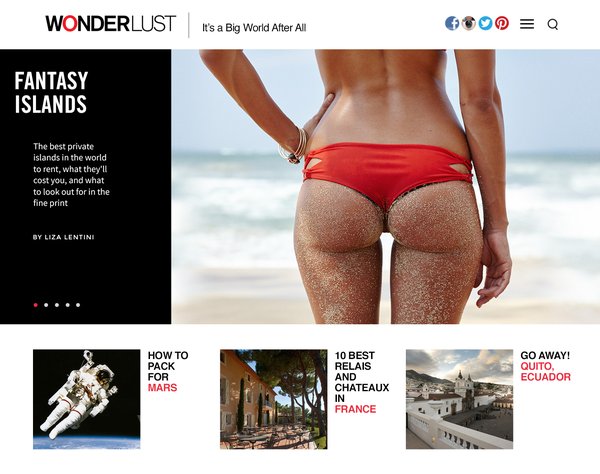