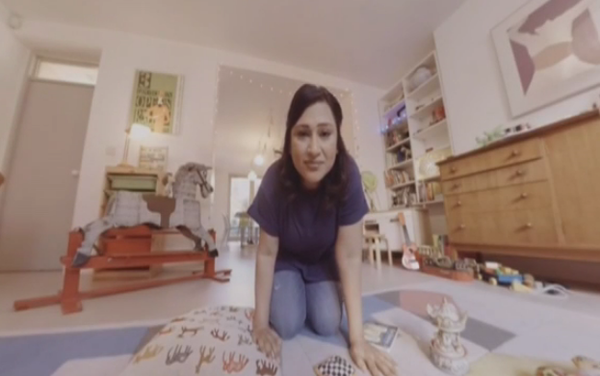 The Guardian has launched a new virtual reality project to explore how a baby sees the world during the first six months of its life.

Titled "First Impressions" and created by the Guardian’s in-house VR team, this is the third virtual reality project from the Guardian available on Daydream View, Google’s platform for mobile VR.

Charles Nelson PhD, professor of pediatrics at Harvard, narrates the "First Impressions" experience, which is based on research in neural development and color vision in infants.

At the beginning of the video, only muted colors and fuzzy shapes are visible. As a baby’s visual capabilities develop, reds and greens come into view, followed by yellows and blues. Depth of focus increases and the room becomes 3D as people and objects come into focus.

In his narration, Nelson also explains the impact on brain development, behavior and social functioning in children if they are deprived of responsive care and social interaction during the formative first six months of a baby’s life.

“The ability to explore the world through the eyes of a baby offers an unprecedented opportunity to really understand how they see and experience the world,” Nelson said in a statement.

The film is supported by editorial and an episode on the Guardian’s "Science Weekly" podcast about the visual development of babies.

Francesca Panetta, executive editor of virtual reality at Guardian News & Media, stated "First Impressions" gives viewers a "real insight into a period of crucial development which we have all experienced but aren’t able to recall."

The Guardian plans to roll out three more VR films on Daydream. The first two are “Underworld,” a virtual exploration of London’s sewer system, and “Arctic,” a tour of the melting Northwest Passage.

Many publishers are taking on the relatively new virtual reality platform. USA Today Network has a weekly virtual reality show called “VR tually There,” and The New York Times publishes daily 360 videos to support its reporting.